Turnout was huge at Saturday’s 41st LD Town Hall at Somerset Elementary School in Bellevue. Scores of people were standing around the perimeter of the gymnasium. The largest component of the crowd was school teachers dressed in red, many of them holding signs in favor of fully funding education.  There were scores of teachers outside the school when I arrived. 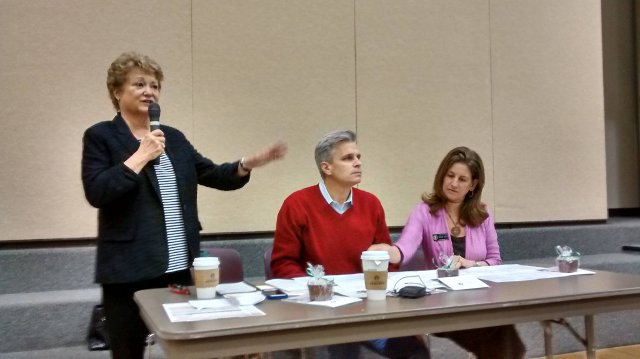 The legislators did not make prepared speeches. Instead, they immediately accepted questions from the audience.

Clibborn said that business leaders are some of the most vociferous supporters of increasing the gas tax to fund transportation, because their delivery trucks can’t deliver goods fast enough, and their workers sit in gridlock. Unless the state invests in transportation, economic growth will falter. Even Republican Steve Litzow agrees that we need to raise the gas tax.

An added benefit, which nobody dwelt upon, is that the gas tax will discourage driving; it’s a carbon tax.

Another benefit of the gas tax, for the corporations, is that it’s regressive. Heck, Boeing and Microsoft made sweetheart deals to avoid paying most state taxes, but they demand publicly-funded transportation and other infrastructure. See Microsoft and Boeing convinced Gregoire to back a costly tunnel, but they avoid paying state taxes.  Also, did you notice that the proposed light rail line runs to Redmond?

Several speakers railed against tolling of I-90, saying it would harm Mercer Island and especially people there who live on fixed incomes. All three legislators were eager to show that they oppose tolling of I-90. But Clibborn warned that they can’t guarantee that tolling won’t happen, because the legislature needs to come up with money for road and bridge construction and maintenance, and the tolling option was added as a condition for passing legislation. Again, legislators from the eastern part of the state don’t want to pay for our road construction.

I have limited sympathy for the opposition to tolling of I-90. Mercer Island is one of the wealthiest communities in the state. If anybody can afford to pay tolls, they can. After the town hall, I said this to Richard Erwin, chair of the King County Dems. He said that people would leave Mercer Island if I-90 were tolled, and land prices there would go down. He said that much of the value of homes on Mercer Island is a function of the good schools. But parents will dislike sending their kids there if they have to pay tolls.

All three legislators and Rich Erwin live on Mercer Island, and it’s understandable that they’d oppose tolling, to please their constituents.

Probably some elderly people have all their assets in their homes and property, which are probably worth a lot of money.  Of course, some Mercer Islanders rent and really are quite poor, and some poorer people commute on I-90. But such driving needs to be discouraged if we are going to save the planet from climate catastrophe — and save the Seattle area from traffic deadlock and filthy air.

A couple of guys made short speeches about the burden of taxation on people like themselves on fixed incomes. At least one of them (Klaus, I believe) was from Mercer Island. At each 41 LD town hall meeting I’ve gone to — and I’ve been to four or five of them — someone makes such an anti-tax speech. It’s always an old guy in his 60s or 70s.  Maybe they are Republican plants.

I threw in a jab about the fact that rich people on Mercer Island complain about taxes and tolls. Then I said, “This is directed mostly at Sen. Litzow. Will you support Gov. Inslee’s proposal for a capital gains tax? How will you work to fix our insane, upside-down tax system?” I mentioned that rich companies like Microsoft and Boeing are exempt from many taxes. I added that Republicans are largely to blame for the anti-tax mentality, but the voters should support an income tax and should stop voting against their own self-interest. I said I could speak for an hour on the topic.

The old guy to my left, who had read a prepared speech about not tolling I-90, looked stony faced and angry.

Litzow said that we can’t blame (just) Republicans for our tax system. Democrats were in control of government for many recent years. He’s partly correct. Ex-Micrsoft general manager Ross Hunter helped arrange billions in tax breaks for his former employer. Inslee arranged an $8.7 billion tax break for Boeing. Basically, Boeing and Microsoft own the legislature and many of our US Congressional delegates. But Republicans are most eager to oppose taxes. Dems generally supported I-1098 (high earners’ income tax) and a capital gains tax.

Litzow said that the reason voters rejected an income tax is that they didn’t trust the government to do the right thing. He said he’d support a flat tax.

I should have shouted out a follow-up question about his call for a flat tax, since a flat tax is regressive.

I also should have asked Steve Litzow this challenge: Republicans including you are willing to raise the regressive gas tax. Will you support raising taxes on the rich to make our tax system less regressive? 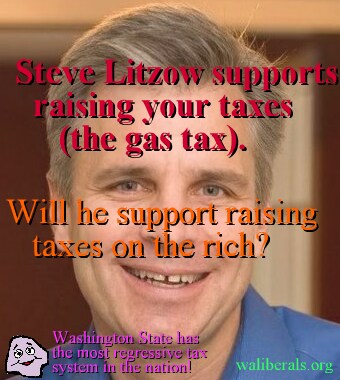 After all, The Norquist anti-tax pledge allows signers to support raising regressive taxes only.

We have socialism for the rich in America, and especially in Washington State. The rich get bailouts and tax breaks. They enjoy the benefits of prosperity, infrastructure, policing, laws, war profits, government contracts, roads, and an educated workforce. But too often they manage to avoid paying taxes.

According to the New York Times’ The Rich Get Richer, “the 1 percent has captured about 95 percent of the income gains since the recession ended.”

The sales tax is regressive.  So are the gas tax and road tolls.  The real solution to the state’s budget problems is to enact fair taxation — something the Republicans, and some Democrats, are opposed to.

Back to the town hall … SB 5899  and HB-1922 would change the rules on payday loans, such as those offered by Money Tree.  Much of the progressive blogosphere is expressing outrage over Democrats’ support of the bill because, they say, it will exploit poor people and charge them exorbitant rates of interest.  There was a question at the town hall about the bills. But first some background.

The forces pushing SB 5899 (the Moneytree bill that would undo the payday lending reforms we fought so hard for in 2009) passed the Senate after 2 hours of floor debate and 40 amendments voted down. (Thanks Maralyn Chase, Sharon Nelson and Pramila Jayapal!) The new loans are actually much worse, with fees piled upon fees up to 276% APR. Senators Liias, Kaiser, Ranker and Hobbs co-sponsored it. The Moneytree Bassfords gave $3,800 (the max) to Sen. Marko Liias, but don’t expect the vote in House Business & Financial Services to be different, with $3,800 to Springer, $3,800 to Stanford, and $950 to Hurst.

Watching extended debate on SB 5899, small consumer installment loans, with prime sponsor Marko Liias (D-21) defending a bill that every agency and faith community opposes. He claims today’s payday loan product is broken. It’s not. He compares this new product with a payday loan which would be cheaper for the first weeks, but much more expensive over the average life of the loan, three to six months. He repeats the talking points of Moneytree.

Standing in opposition and offering 40 amendments (!) are our heroes of the evening Sens. Pramila Jayapal, John McCoy, and Minority Leader Sharon K. Nelson. Thank you Maralyn Chase for acknowledging those of us watching live on TVW. Thank you Jeannie Darneille for quoting the state’s Asset-Building Coalition about the lack of humanity in this bill. Thank you Cyrus Habib who said “I must be going blind” because I didn’t see anyone in the gallery or the hallways asking for this product, which amounts to usury.

We’re getting a strong lesson in social justice being crushed by corporate money. The payoff, if there is one, is that many other bad Senate bills will die at 5 p.m. Wednesday for lack of floor time. I have a mental image of floor time being auctioned off to the highest bidder. Senate rules suspended to continue meeting past 10 p.m.

Pam Roach chimes in that she took out a payday loan when she had 5 kids under 9 years old. Jan Angel claims that it’s needed (by other people) and it’s better than going online. The conclusion was known from the outset. Passed 30-18. The mystery is why Marko supported it.

Cindy Ryu has certainly called this one correctly. She will be a lonely voice on the House Business & Financial Services Committee. The Chair loves the Bassfords and the others have pretty much maxed out from them. It will have to be done in Rules or from the floor. Cindy, please let us know when the hearing is scheduled. We need to turn out.

Before the town hall began I asked Judy Clibborn about her support for the bill. She said that Pew Research was in favor of it and the opponents are misinformed.  Sarajane wrote on facebook

Pew Research has sent a letter opposing the bill and stating that our current regulations are very strong and should stay in place. The Attorney General has also opposed the bill. And the Department of Defense actually had a great report in predatory lending products, including installment loans. The DOD caps interest and fees At 36% just like our current regulation does. This bill just allows lots of additional fees on top of the 36% plus a longer term which makes it way more expensive.

In a response to a question about SB 5899, Clibborn defended the bill, which she said still needs work. She said that without the reforms, poor people will resort to online lending, which is less regulated and much worse.

Some teachers asked the legislators to oppose the inclusion of student test scores in the evaluation of teachers. One teacher quoted studies showing that test scores bare no relation to teaching quality. Litzow said that test scores are just one portion (a small portion) of teacher evaluations and so should be included.

At teacher noted that Litzow wore red, but she doesn’t trust him.

Litzow repeatedly said during the question-and-answering that we (he and teachers) will have to agree to disagree.

Response to Claudia Balducci and Kevin Wallace column on transportation

In their Nov 22 letter to the Bellevue Reporter, city council members Claudia Balducci and Kevin Wallace called on the legislature to pass a transportation package that eases the gridlock on our roads and protects our economy. Wisely they write, “We cannot afford the drastic cuts in transit service projected to occur without new funding.” […]

Why a public bank would save money

Passed by the Washington State Progressive Caucus: RESOLUTION TO SUPPORT A STATE BANK OWNED BY AND FOR THE PEOPLE OF WASHINGTON STATE AND A POSSIBLE INITIATIVE TO THE PEOPLE IN THE 2017 GENERAL ELECTIONS WHEREAS, the taxpayers of Washington state have demanded greater accountability and wiser use of the taxes they pay to benefit Washingtonians, […]

Below are scanned images of one of the anti-Suzan DelBene fliers sent out by Progress Washington, which, according to this article, was a PAC formed by Laura Ruderman’s mom, Mary Rotchschild. (Ruderman and DelBene are running for Congress in the 1st CD.) Ruderman and her mom have come under criticism by some Democrats for engaging […]