For documentation of the claims see Playing Russian Roulette in Ukraine With Rep. Adam Smith, or the detailed How the U.S. provoked Russia in Ukraine: A Compendium.

When I share content that exposes U.S. culpability in the crisis in Ukraine, some people attack me, saying that I am parroting Putin’s propaganda, etc. It’s going to take a while before Americans realize they’ve been duped, just like they were duped about Vietnam, Iraq, Afghanistan, etc. To be clear, Putin’s invasion was criminal (as were the many U.S. wars and proxy wars after WWII). But that doesn’t at all imply that the U.S. is innocent in Ukraine.

My friend Rebekkah Alpisa wrote on facebook (and gave me permission to quote her): 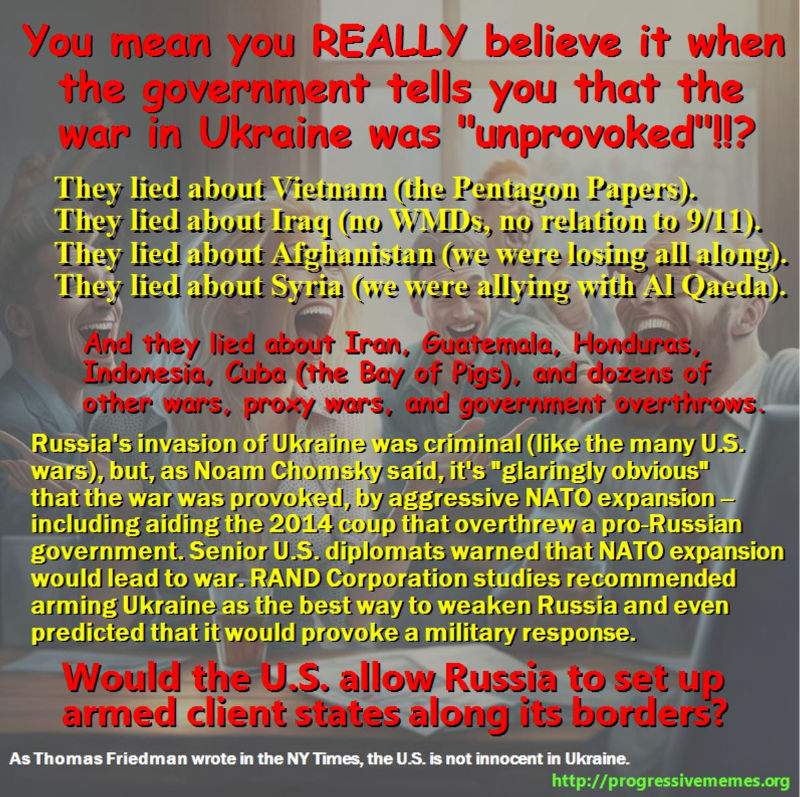 “There are instruments so dangerous to the rights of the nation and which place them so totally at the mercy of their governors that those governors, whether legislative or executive, should be restrained from keeping such instruments on foot but in well-defined cases. Such an instrument is a standing army.” –Thomas Jefferson to David Humphreys, […]

I read Lee Kuan Yew: The Grandmaster’s Insights on China, the United States, and the World. You might call Yew a benevolent dictator. There’s no freedom of the press in Singapore, and people who criticized him usually ended up broke or in jail.  But Yew is considered a genius, for in one generation he turned […]

Prominent conservative David Brooks has some harsh things to say about the Republican Party in this New York Times editorial: The Republican Party may no longer be a normal party. Over the past few years, it has been infected by a faction that is more of a psychological protest than a practical, governing alternative. The […]