At my previous job, there was a coworker who was amicable and technically smart. Though he and his wife combined earned over $300K a year, he complained a lot about taxes. He’s a white Christian. He is skeptical about climate change and evolution. He watches Fox News and listens to Rush Limbaugh. He hates Dems and voted for Trump.

But, really, he’s (otherwise) a nice guy, with a self-deprecating sense of humor. I liked him, he liked me, and we enjoyed chatting. In our discussions, I told him that a pro-life Christian should be in favor of medical care for all — at least, surely, medical care for children, elderly, and poor people. He reluctantly agreed that basic medical care should be guaranteed. He told this to his (Chinese) wife, who is even more conservative than he is and who then feared that he was becoming soft.

He kept trying to convert me to Christianity, to no avail.

After I left that job, he tried to reach out to me. But I rebuffed his efforts, even though I like him, because I am repulsed by his political views. After all, he voted for politicians who lie frequently and promote destructive policies: deregulating Wall Street; gutting the EPA and other regulatory agencies; creating tax breaks for billionaires; under-funding the IRS so tax cheats aren’t audited; making it harder for minorities and poor people to vote; separating parents and children at the border; allowing billionaires to buy elections and set policy; denying climate science; favoring corporations over unions; making it easy to buy military-style guns and ammunition; suppressing rights of women and gay people; giving even more money to the Pentagon while slashing other parts of government; etc, etc.

Are the GOP politicians he supports sociopaths? I think many of them are.  Some of the politicians probably regret being forced to support radical positions; this is probably why many Republican politicians are quitting.

Does my friend’s support for these politicians make him a sociopath too  — “a sociopath-by-proxy”?  I’m not sure.

Are Big Pharma executives who raise prices on insulin and other once cheap drugs sociopaths? Probably they are.   Same with Wall Street executives and executives at military contractors.

But I bet that in person many of these sociopaths — George W. Bush, Dick Cheney, Big Pharma executives, etc — are friendly, likable people.

In fairness to my coworker and to other Republicans, many Trump voters disliked Trump and voted for him only because they thought Hillary was even worse.   This is what my friend said about the choice between Hillary and Trump.  Still, Trump was  obviously corrupt, stupid, racist, crude, dishonest, and misogynistic.   Though I disliked Hillary’s hawkishness and her friendliness to Wall Street, she was clearly more qualified, more honest, and less destructive than Trump.  The email scandal which Trump and others made such a big deal about was minor compared to all the scandals involving Trump.

How is it possible for an intelligent, decent person to vote for Trump over Hillary?

I know a progressive woman who became estranged from her sister because her sister joined the NRA in response to the Parkland shooting and the protests that followed from it.

The country is so deeply divided.

It’s hard to believe that all Republican voters are sociopaths.  I rather believe they’ve been brainwashed, by Fox News, AM talk radio, Breitbart News, and other conservative media.  And that they are part of a corrupt system.

I can forgive uneducated, poorly informed people for voting for Trump and other Republicans. I cannot forgive my friend, who is too smart to fall for their lies and distortions.

The phrase “banality of evil” is often used to describe why seemingly decent people can support or do horrible things. I’m sure many Nazis were good family men; they got caught up in a system of extreme evil. Likewise, I’m sure that George W. Bush is an amicable, likable guy in person. This might explain why Michelle Obama was able to cuddle him in this rather disturbing photo. 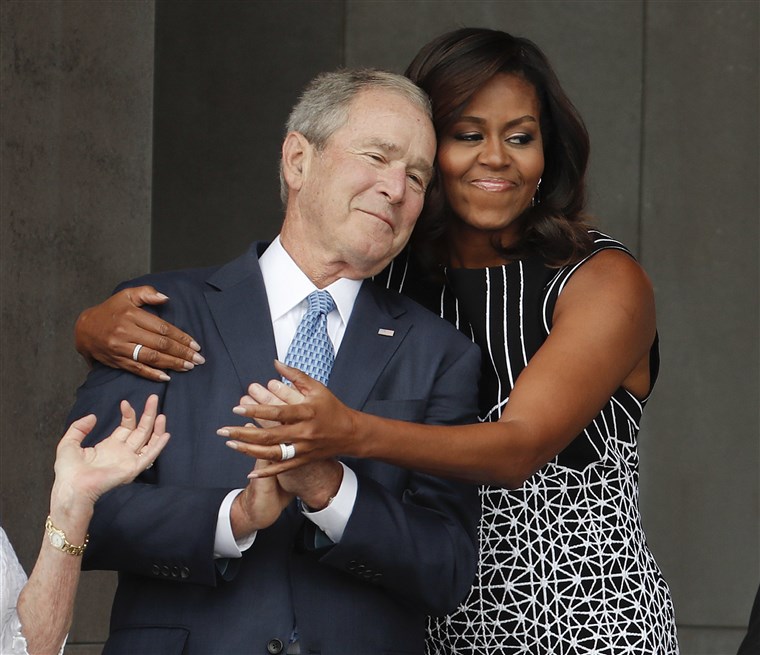 The photo is disturbing because George W. Bush is basically a war criminal — aside from all the other damage he and his cohorts did to America and the world.

With the photo and the story of my coworker in mind, I can now explain the three interpretations for the title of this essay.

I fear for the future. I won’t be surprised if the Republicans do well in the 2018 midterms [thankfully, they lost control of the House] or if Trump wins re-election in 2020. Trump said, “I could stand in the middle Of Fifth Avenue And shoot somebody and I wouldn’t lose any voters.” Not quite true, but about 42% of Americans support him still, and his support has been increasing. It boggles the mind. But this article gives a hint about why people voted for Trump and about the need for Democrats to improve their messaging.

Fireplaces burning in the summer when it’s 90 degrees!

Yesterday in downtown Bellevue, I attended the Bellevue Arts Festival and popped into Lincoln Square South and other stores to cool off. I looked into the classy Hotel W and saw that they were running gas-powered fireplaces: This is despite the fact that it was about 90 degrees outside. I see other buildings in downtown […]