Residents of the 41st LD are getting lots of fliers in their mail in support of fake Democrat Wendy Weiker.  Weiker is running for the state House against My-Linh Thai, who is the current president of the Bellevue School Board  and is the candidate endorsed by the 41st LD Dems and by most Democrats.

If you do a search on Washington State’s Public Disclosure Commission for Enterprise WA’s Jobs PAC you see that its top contributors are:

Weiker is also being supported by the pro-charter schools Stand For Children PAC, which is funded by Bill Gates and other rich people. (If you do a search of the Washington State Public Disclosure Commission’s website, for Stand for Children, the source of the money is obfuscated. In 2017 $1,000,000 came from Stand for Children Portland, Inc.)  Stand for Children sent out at least one mailer for Weiker. 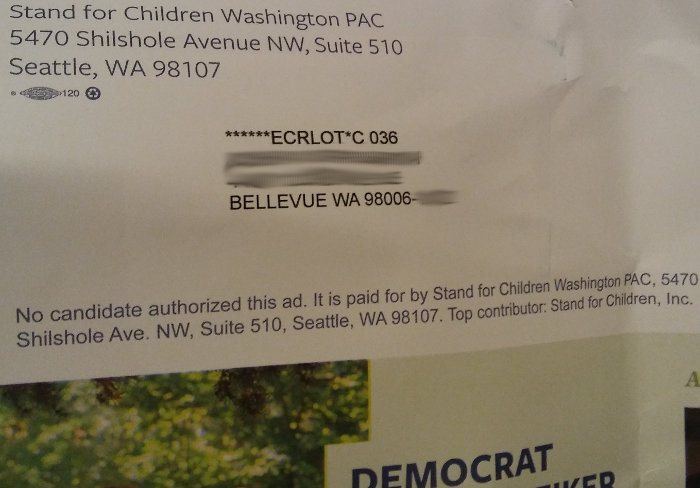 Another fake Dem is Rodney Tom, who flipped control of the State Senate to the Republicans in 2012. See this resolution.

In fact, Progress Enterprise WA, who is supporting Wendy Weiker, also supports Rodney Tom, and last year they supported the Republican Jinyoung Lee Englund who ran and lost against Manka Dhingra in the 45TH LD Senate race.  Prior to that they supported Republican Lisa Wellman. The Seattle Times reports in Running as a Democrat for the state Senate, Rodney Tom attracts help from Republican-leaning groups:

As of Monday, Republican-leaning groups have spent roughly $193,000 on ads in support of Tom.

Of that, $186,000 comes from a political-action committee called Citizens for Progress Enterprise Washington, with the balance coming from the Mainstream Republicans of Washington.

Citizens for Progress Enterprise Washington was one of the biggest players in last year’s 45th District special Senate election, which became the most expensive legislative race in state history.

In that race, the group spent more than $1 million in favor of Republican Jinyoung Lee Englund, or against Manka Dhingra, the Democratic candidate who prevailed.

Reflections on the 2014 election

GWB was the best thing for organizing on our side in many years. He forced everyone to get together in opposition. As soon as he was gone, we started splintering. But he’s NOT gone, he was always just a front man. The folks behind him are still there, working as hard as ever against most […]