Critter’s Crap breaks down economics for us. It’s really quite clear.

Over a long period of time, the numbers show that the economy grows at a rate of 2.1%. We can and should have a discussion about steady state economics in light of resource depletion, but for the purpose of evaluating economic activity, income and wealth growth and distribution, Critter’s work is on the money (so to speak). 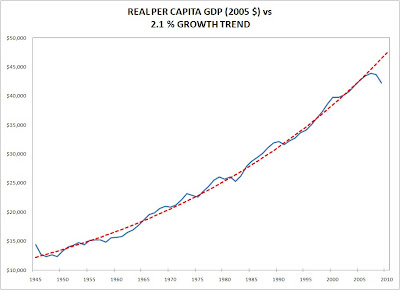 That alarming dip at the end is the 2008 Great Recession.  Will the economy bounce back to the historical 2.1% rate?  Probably will, but the other possibility is that the world will end on May 21st and this discussion will be moot.  Let’s assume the former rather than the latter, shall we?

So that graph suggests that the economy has grown at a pretty steady rate over time regardless of tax policy.   Critter goes on to look at income distribution under the various tax schemes that have been in effect in the time from of this graph and shared the following: 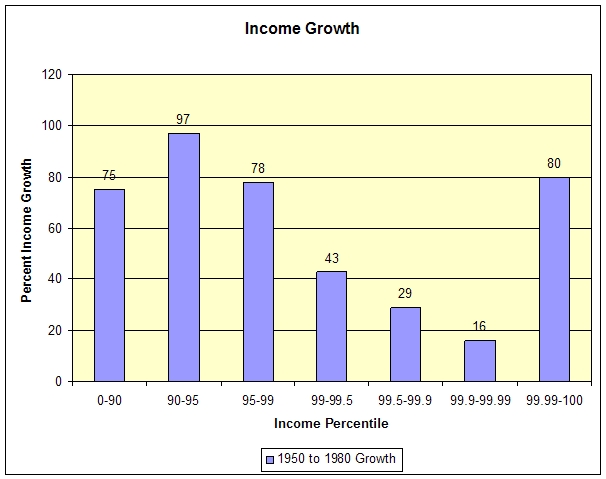 That looks pretty fair.  A lot of folks doing fairly well under the “onerous” tax rates that existed prior to the coming of Ronald Raygun.

But take a look at what happened to income distribution since Mr. R showed up and started spewing his economic nonsense:

I understand that many Americans can’t make heads or tails of economics and that certainly goes a ways to explain how the electorate falls for the suggestion that a flattened tax rate is going to do us all good, but the numbers are clear.  A flattened tax rate does the top 1% a lot of good 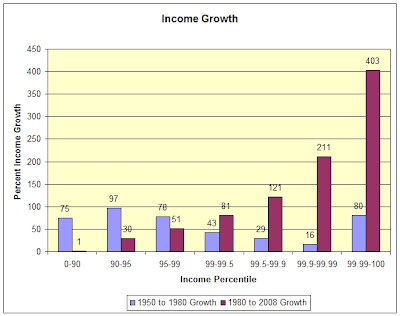 and it hurts the rest of us.  The income is simply redistributed from the middle class to the really, really wealthy.  Check your last tax return.  If your gross income is not in the millions range, you are not really, really wealthy.  Sorry to break it to you.  You may be comfortable, maybe you can afford a really nice car, vacations in the sun, and more, but you are not up in that range where your income grew by 403% in the last 28 years.

I know that I go over this whole economic thing on a regular basis, but as long as so many folks who can figure out how to mark a ballot continue to misunderstand the economics of taxes and income distribution, I think the work is not done on this topic.

Tax the rich.  If you have read this far, you are not rich.  The rich know all of this and don’t spend any time worrying about it.  They are getting the ride of a lifetime, but the rest of are finding the ride a trifle bumpy.  When the rightwingers claim that lower tax rates will cause the economy to grow, remember that chart at the top.  2.1% growth over a very long period of time.

Thanks to Critter for the good work.  Go read Critter’s take on all this.  It seems to get him going a bit, so if you are frightened by the F Bomb, better just stick with my PG review of Critter’s work.

State Rep. Roger Goodman is indeed running for Dave Reichert’s 8th CD congressional seat. It seems like Goodman strong on the environment and judicial issues.  He has a master’s degree in public administration from Harvard and a stellar resume. Goodman’s web page description (from http://www.goodmanforcongress.com/about) gives me hope that he’ll be a strong candidate and […]

There is Strength in a Union

Unions can go bad, (think Tony Boyle of the UMW) but the unions gave us the weekend, the eight hour day and ended child labor in this country. Unions have clearly lost power in the past 60 years and I hope they have bottomed out and are about to make a resurgence. I am a […]

Louder Than Words — a video about President Obama; notes on my LD

Louder Than Words — Roots Action’s video critical of President Obama The timing of this video is perfect. President Obama is back in full campaign-mode, and he’s a brilliant speaker and campaigner. But too often his actions belie his words. Yesterday at my local Democratic LD organization, there was a rather heated discussion about the […]