I have posted about this before, but I think the story and its importance have not gotten any traction yet. I am not sure why that is the case because this is a pretty amazing revelation about the automation of propaganda and disinformation by the intelligence community against the American people.

Darlene Storm over at Computerworld has now taken up the story. Here is Darlene’s lead:

It’s recently been revealed that the U.S. government contracted HBGary Federal for the development of software which could create multiple fake social media profiles to manipulate and sway public opinion on controversial issues by promoting propaganda. It could also be used as surveillance to find public opinions with points of view the powers-that-be didn’t like. It could then potentially have their “fake” people run smear campaigns against those “real” people. As disturbing as this is, it’s not really new for U.S. intelligence or private intelligence firms to do the dirty work behind closed doors.

It’s not a big surprise that the U.S. military also wants to use social media to its benefit. Last year, Public Intelligence published the U.S. Air Force social media guide which gave 10 tips for social media such as, “The enemy is engaged in this battlespace and you must engage there as well.” Number three was “DON’T LIE. Credibility is critical, without it, no one cares what you have to say…it’s also punishable by the UCMJ to give a false statement.” The Air Force used the chart below to show how social media influences public opinion. 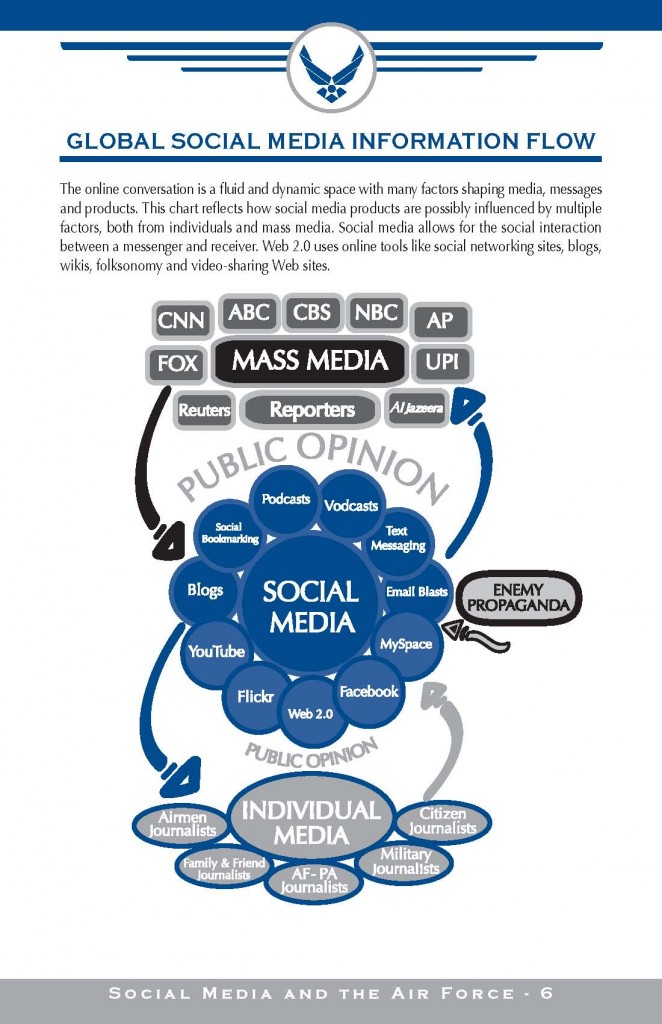 The 6th Contracting Squadron at MacDill Air Force Base sought the development of Persona Management Software which could be used for creating and managing fake profiles on social media sites to distort the truth and make it appear as if there was a generally accepted agreement on controversial issues. “Personas must be able to appear to originate in nearly any part of the world and can interact through conventional online services and social media platforms.” What happened to don’t lie and the Uniform Code of Military Justice?

Everything revealed after Anonymous leaked emails from private security firm HBGary Federal is disturbing on many levels. However, the Daily Kos said with the Persona Management Software it would take very few people to create “an army of sockpuppets” which could distort the truth while appearing to be “an entire Brooks Brothers riot online.”

So again I ask, what happened to number three . . . the rule about not lying that was also “punishable by the UCMJ to give a false statement”?

I think the problem is that it is theoretically possible to be punished for breaking laws or giving a false statement. The application of law and punishment is tilted heavily in favor of getting away with law breaking within the context of maintaining the status quo. Bernie Madoff goes to jail, but he’s the exception. He went off the deep-end and simply fabricated financial statements instead of making a fortune creating hyper-inflated derivatives to sell off to the rubes, the pension boards, the 401k patrons in the manner of more mainstream Wall Street raiders. Bradley Manning is in solitary for months as the military and government use their tools and playbook to torture Manning in this way that leaves no fingerprints, but clearly breaks human beings who are clearly social creatures. Deprive us of all social contact and context for months and we come apart. This is hardly news, yet it continues to happen.

You tell me, is the government and the military committing crimes when they engage in lying and propaganda to manipulate public opinion using social media? Is it or should it be a crime to hold any human being in social isolation? and the really big question, is there any way that we can level the playing field and encourage the prosecutorial powers to ply their trade against the insiders who are breaking laws or is the justice system primarily reserved for harassing the enemies of the status quo?

Michael Louis Connell: killed before he could testify about GOP voter fraud

From Wikipedia: “Michael Louis Connell (November 30, 1963 – December 19, 2008) was a high-level Republican consultant who was subpoenaed in a case regarding alleged tampering with the 2004 U.S. Presidential election and a case involving thousands of missing emails pertaining to the political firing of U.S. Attorneys. Connell was killed when the plane he […]

Thanks to Abby Zimet at Common Dreams for her thoughts about this and for running this video there. Comments comments