Anonymous, a self-styled “senior Trump administration official,” has written a book A Warning (Hachette Book Groups, Inc., 2019) as a follow-up to his (or her) September, 2018 op-ed in the New York Times, “I Am Part of the Resistance Inside the Trump Administration.”

Anonymous describes himself as a committed Republican and not a never-Trumper. He had high hopes for Trump, at first, and approves of some of Trump’s policies (e.g., his Supreme court picks).

To be clear, there is no seditious plot inside the administration to undercut the president. The Steady State is not code for a coordinated scheme to sabotage his policies or, worse, oust him from office. I use “resistance” in quotes because it’s neither the Right’s fear of a “Deep State” gone rogue, or the Left’s conception of an active subversion campaign…. Instead, the early Steady State formed to keep the wheels from coming off the White House wagon,”

because the White House was so poorly managed. 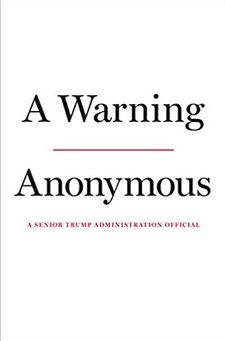 Anonymous says that members of the Trump administration regularly ignore orders from the President that they consider illegal or ill-advised. At several points in the presidency, there were discussions among administration aides about whether to resign en masse and call for the removal of Trump from office.

Anonymous says that there were responsible, intelligent aides and cabinet members who were willing to put a brake on Trump’s crazier inclinations, but most of those people have by now resigned or have been fired. Mostly sycophants remain. This puts the nation at risk. “The Trump story is briskly moving into a fiction universe,” because aides are afraid to tell Trump the truth. Also, there is bad infighting and back-stabbing as aides jockey for promotions and scheme to get others fired (which often happens).

Presidential briefings of Donald Trump are unlike briefings for any other president, says Anonymous. For normal presidents, aides prepare substantial documents for review. But with Trump things are different. “Early on, briefers were told not to send lengthy documents. Trump wouldn’t read them.” So they started using PowerPoint decks. “Then officials were told that PowerPoint decks needed to be slimmed down. The president couldn’t digest too many ideas.” Three main points. Nope, that was too much. Just one main point, please, and make sure to repeat it over and over, because “you cannot focus the commander in chief’s attention on more than one goddamned thing over the course of a meeting, okay?”.

“What the fuck is this? the president would shout, looking at a document one of them handed him. “These are just words. A bunch of words. It doesn’t mean anything. Sometimes he would throw the papers back on the table. He definitely wouldn’t read them.”

“President Trump is fundamentally undermining our perception of ‘truth.’ He has taken us down a dark, subjectivist rabbit hole … The president’s untruths resonate with supporters due to their ‘confirmation bias.'”

“Trump has attacked the media on Twitter well over a thousand times since taking office and tweeted the phrase ‘fake news’ five hundred plus times.” Trump called the press “the enemy of the people.” The U.S. Senate unanimously passed a resolution rebuking Trump’s statement. But “Trump revels in the herd-like behavior of his followers.” Trump inflames public discourse. “That’s how the president turns his own fake news into instantaneous reality.”

In a chapter titled “A Weakness for Strongmen,” Anonymous recalls that Trump often insulted friendly nations and their leaders, while praising dictators, including Putin and North Korean leader Kim Jong-un. “Trump’s overall alienation of our closest partners is putting us at risk.” “No major US ally has been spared from the president’s indignities.” The U.S. needs friends, Anonymous insists. “A handful of America’s clever partners have .. learned to play him” via flattery. “Our enemies and adversaries recognize the president is a simplistic pushover… He is visibly moved by flattery. He folds in negotiations, and he is willing to give up the farm for something that merely looks like a good deal.” Trump obsesses about odd issues (such as trade and tariffs) and ignores many other issues important to the country.

Trump imagines that he has special relationships with demagogues such as Putin and Kim Jong-un, whom he described as being “in love” with.

In a section Big Little Lies (p 193), Anonymous quotes Trump’s tweet about NASA: “For all of the money we are spending, NASA should NOT be talking about going to the Moon – We did that 50 years ago. They should be focused on the much bigger things we are doing, including Mars (of which the Moon is a part), Defense and Science!” Anonymous says, “Everything the president says is not a lie, but an awful lot of it is.” The list of lies goes on and on, he says.

The president has been called a pathological liar. I used to cringe when I heard people say that just to score political points, and I thought it was unfair. Now I know it’s true. He spreads lies he hears. He makes up new lies to spread. He lies to our face. He asks people around him to lie.

Anonymous quotes some of Trump’s more racist and hateful language. “At a minimum, Trump’s language is alienating in a way that feeds hateful groupthink. …. [T]here is no avoiding the fact that his words have a striking undertone of racial animus….. I still don’t think he’s a hardline racist, but draw your own conclusions.” Anonymous says “Extremists are hijacking the president’s rhetoric to promote their movements.” Anonymous gives as an example the killer responsible for the mass shooting in El Paso who said he was defending the country against an “invasion” of immigrants — echoing Trump’s language.

Steady Staters try to moderate the presidents rhetoric, by preparing speeches, but Trump usually goes off script. Afterwards, aides have to perform cleanup, often even lying to the press to try to fix the damage. Often aids scheme to get the president away from D.C., where he can do damage, by sending him to rallies or overseas.

Anonymous worries about “democracy’s foundations being ripped apart by mob rule.” He thinks that Trump has created “a true cult of personality” and that tribalism and blind faith in the tribe drive many of his supporters. Greed, fear, and power drive many of Trump’s aides. Trump’s authoritarian tendencies exacerbate the problem.”Trump embraces fear as a management tool,” threatening aides with termination if they disagree with him. Many Trump staff begin with noble intentions, but the ones who stay are usually corrupted and acquiesce in falsehoods and bad policies. “Trump’s character rubs off on people.”

Speaking of Ukrainegate and the impeachment proceedings in Congress, Anonymous writes, “He [Trump] has always acted impulsively to serve his interests over those of the United States…. he has repeatedly concocted ways to break the law if it gets him what he wants.” Anonymous doesn’t doubt that Trump acted improperly with Ukraine or that he obstructed investigations. Still, Anonymous is reluctant to support impeachment and said that, though there were discussions to invoke the 25th Amendment and have Trump removed from office, the discussions were never close to being acted upon. (It might have caused violence in the streets, he surmises.)

“The Trump administration is an unmitigated disaster.” There are some benefits from his policies, Anonymous says, but they’re outweighed by “the damage he has done to the fabric of our republic.”

We’re lucky there’s been no major crisis (like a terrorist attack or war), because Trump cannot be trusted to act smartly.

When I shared some of the quotations from the book with a Republican acquaintance, they refused to believe they were accurate descriptions of Trump.

The Washington State Senate is considering Senate Joint Memorial 8002 (SJM 8002) — Asking Congress to call a limited convention, authorized under Article V of the United States Constitution, for the purpose of proposing a free and fair elections amendment to that Constitution. The companion state house bill is HJM 4004. You can read the […]