The facebook page of the Washington State Tea Party posted the following crude, anti-woman joke. The joke was apparently posted by Andy Stevens.

A woman from Los Angeles, who was a tree hugger, a liberal Democrat, and an anti-hunter, purchased a piece of timberland near Colville, WA. There was a large tree on one of the highest points in the tract. She wanted a good view of the natural splendor of her land so she started to climb the big tree. As she neared the top she encountered a spotted owl that attacked her.

In her haste to escape, the woman slid down the tree to the ground and got many splinters in her crotch. In considerable pain, she hurried to a local ER to see a doctor. She told him she was an environmentalist, a democrat, and an anti-hunter and how she came to get all the splinters. The doctor listened to her story with great patience and then told her to go wait in the examining room and he would see if he could help her.

She sat and waited three hours before the doctor reappeared. The angry woman demanded, “What took you so long?” He smiled and then told her, “Well, I had to get permits from the Environmental Protection Agency, the Forest Service, and the Bureau of Land Management before I could remove old-growth timber from a “recreational area” so close to a waste treatment facility. I’m sorry, but due to Obama-Care…they turned you down.”

The facebook page says, “While this website represents the Anacortes Washington State Tea Party it has no official affiliation with the Tea Party other than mutual shared interests.”  It lists the following links: http://www.go-patriots.com, http://www.teaparty-patriots.com.

In an article at the Washington Journalism Center, Hannah Cummings called Stevens “one of the most uneducated” members of the Tea Party group. She wrote of him: 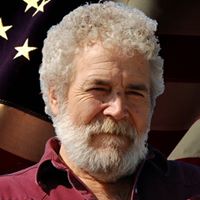 Andy Stevens, 68, a video producer and a founder of the Tea Party Patriots in Anacortes, Wash., said he described Obama’s race and and religion as “somewhat important” to members of his group because they remain troubled by what they see as the president’s un-American and un-Christian behaviors.

In Stevens’s view, those include Obama’s “socialist” policies and intentional failure to mention “the creator” when talking about inalienable rights.

“There are questions that don’t get answered, like citizenship and his birth certificate,” Stevens said. “I don’t know why questions keep popping up all the time. If something is irrefutable, the questions wouldn’t keep popping up.”

The page http://www.go-patriots.com/ has a link to a celebration of the Glenn Beck Homecoming.

The following image appeared, with the caption “To those who serve… From all of us to all of you with love and respect!.”

But the page also has a message “Support our troops — bring’em home!”

The webpages and this slideshow of people holding signs oppose the bailouts and “socialist government.”  Many of the messages are critical of Obama and of “Obamacare.”  One sign says “, , Socialism Failed!.”   Many signs say “Taxed Enough Already” (though taxes are historically low, on rich people and corporations) and “Don’t Tread on Me.” Everyone seems white. Most are elderly.  “More Liberty, Less Government.”  “Freedom before you loose [sic] it.”

The page also includes the following image, which could just as well appear on the page of progressives:

I plan to watch the videos and read the articles accessible from the Tea Party pages to try to better understand what motivates these people.

According to the Washington State Democrats Endorsement finder, Richard Conlin got the endorsement of all of the Democratic Party organizations. “Endorsed by King, 11th, 32nd, 34th, 36th, 37th, 43rd, 46th” I think it’s time for us to do some soul searching. Not just because our electoral infrastructure might not be up to the task in […]