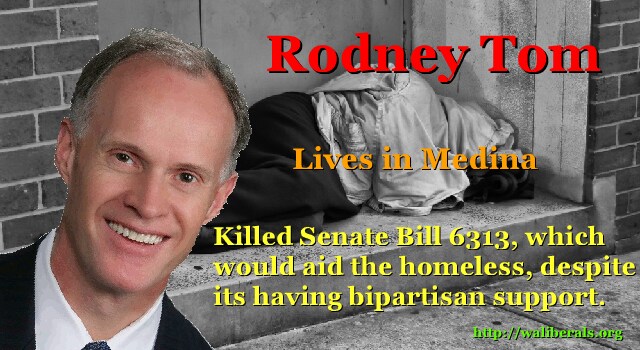 Bill co-sponsor Sen. Hobbs tells Fizz: “Tom told me and Sen. Benton that he told Angel to stop the bill in committee.”

“I’m baffled as to why Tom wanted to kill this bill,” Hobbs concludes. “It was bipartisan. And wasn’t that why the MCC was formed?”

Report on the Mercer Island forum on homelessness of May 15, 2018

On Tuesday night several dozen people attended a homelessness forum at the Jewish Community Center of Mercer Island. The forum was arranged by Clarity Bellevue, which has been involved in the debate about plans to build a low-barrier homeless shelter in the Eastgate area of Bellevue. (Clarity Bellevue is generally opposed to locating the shelter […]

The New York Times reported last week that people over 50, especially widows, are falling into foreclosure faster than any other age group. The reason, in part, is the fine print on mortgages. If the only name on a mortgage is the husband’s, and if a woman survives her husband’s death, she cannot take over […]