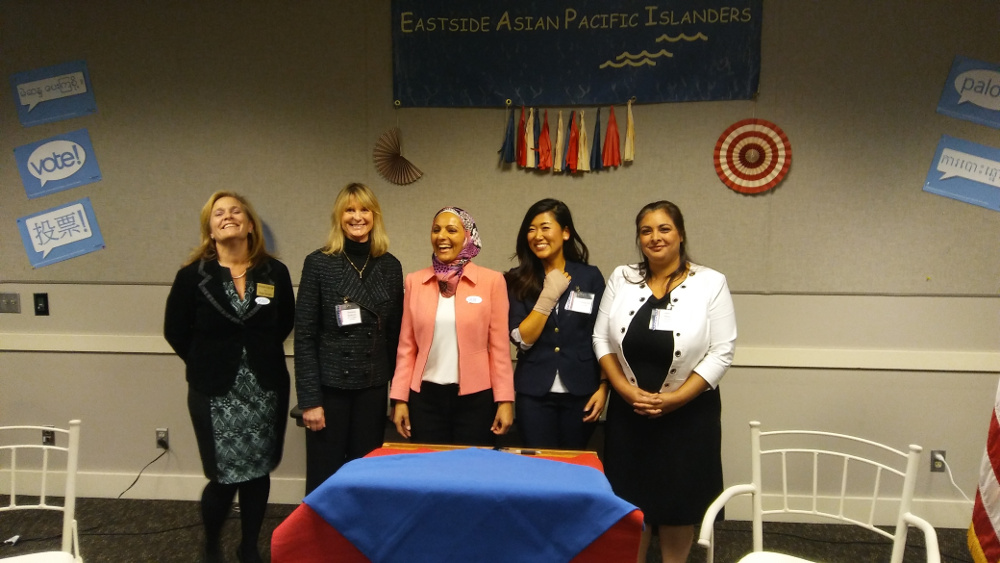 The format was:  the (excellent) moderator asked each of the candidates questions.  Each candidate had four minutes to respond.  There was no time at the end for questions from the audience, though the candidates stayed and responded individually.

Manka Dhingra wants to fund education by reducing some of the many tax loopholes that favor corporations and that don’t benefit the middle class by producing jobs.    Dhingra said that state senate Republicans supported the creation of a registry of Muslim residents.  (“Republican state legislative leaders, however, have been cool to the idea on proposals aimed at protecting against deportations” — source. See also this.)    At one point Dhingra mentioned that the state senate majority leader (Mark Schoesler) once wore a “Make America Great Again” hat in the senate chambers. (Presumably, Dhingra was trying to associate state Republicans with the albatross of extremism of Trump and the D.C. Republicans).  In response, a south Asian (Indian?) audience member rose and shouted, “What’s wrong with that?”.   (What’s wrong with wanting America to be great again?   Or what’s wrong with supporting Trump?)  The moderator and several audience members worked to calm down the woman, who continued to mumble to the people around her.  Dhingra mostly ignored the woman’s interruption.  Asked what bill she would introduce first as a state senator, Dhingra said: a bill to close loopholes in gun laws that allows people convicted of harassment to continue to own guns.

Jingyoung Englund said there is extremism on both sides and repeatedly blamed one-party rule, in both Olympia and D.C., for our political problems.   (But Republicans have controlled the state senate in Olympia since 2012.)  She says that one reason to vote for her is that Republican politicians in D.C. would be more likely to listen to her pleas than to the pleas of a Democrat.  (She is basically admitting that the D.C. Republicans are extreme.)  She claimed Asian Americans would be the majority by some point in the 21st century.  Several of Englund’s answers were vague or  confused. She called for everyone to get together and have “conversations.” Asked what issue she would first address as state senator, Englund said: transportation. “The legislation that I would proactively pursue has to do with transportation. Because when I go door to door, the people in my district over and over the things I feel most about is I feel overburdened by taxes, I want to maintain quality education and public schools, and number three: traffic. Traffic is awful. Wherever you are in Washington State, it’s awful.” (Untrue! Traffic is not awful in rural areas.)   But she offered no solution. Instead she proposed lowering car tab fees — which wouldn’t help traffic at all! She said one Romanian family pays $1200 in car tabs. “I would work with both Democrats and Republicans to find a way to bring relief to the families who suffered this year and then, moving forward, make sure that they don’t have to keep paying such high fees.”   Here is a video of her remarks on transportation.

The moderator asked Englund about our regressive tax system.  Englund avoided the question and didn’t give a straight answer. After the forum, I asked the moderator why she didn’t press Englund about it (the moderator made a point of interrupting the speakers if they strayed from topic); she said she ran out of time, but she encouraged me to ask Englund in person. So I did. Englund again avoided the question and just said that the voters don’t want more taxes.  I said, it’s not a matter of more taxes, it’s a matter of fairer taxes. Still, Englund didn’t respond.

In her closing statement, Englund said that extremism is “deteriorating our democracy” and, overall, gave an impression of someone too immature to be a state senator.   Below is her closing speech, in which she speaks like a high schooler:

Patty Kuderer, who was appointed to the 48th LD state senate seat, emphasized education and the state’s responsibility to amply fund it, per the state Constitution and state Supreme Court rulings.  If we don’t educate the kids, they end up in the court system and we end up paying times as much to prosecute and imprison them.  Kuderer wants to eliminate the real estate tax break for (oil) companies that was hidden in the last-minute budget deal designed largely by the state senate.  Kuderer spoke of our regressive tax system and of the need for a capital gains tax, that would target only 1% of the population.  Asked to name the first bill she would submit as senator she said she’d propose a state infrastructure bank similar to, but more limited than, Sen. Bob Hasegawa’s proposal for a state bank.  Half the cost of infrastructure is debt servicing paid to Wall Street. The state pays $3 billion every year (or two) to Wall Street. But the state can finance projects itself and save a lot of money. North Dakota has a similar bank, and it survived the recession well.  Such a bank would complement, not replace, private banks.

Michelle Darnelle is opposed to the the monopoly on government by the Democratic Party and the Republican Party, which she said are corrupt. She claims to be sympathetic to the concerns of both many on the left (Occupy) and the right (Tea Party) who are fed up with the two main political parties. She called for “incentivizing” quality education via choice, charter schools, and vouchers. She suggested that a strong economy would reduce anti-immigrant views;  she gave the analogy that crowded, starved rats become cannibalistic.    Because of the Las Vegas massacre there will be calls for more government surveillance and meddling with Americans’ rights.    She claimed the ultimate cause for such massacre is the widespread use of anti-depressants, which have nasty side-effects.  Darnelle raised her voice in anger at several points.  Her first bill as senator would be a homeowner’s bill or rights, to protect homeowners from foreclosure when the next recession hits. She claimed that Attorney General Bob Ferguson did little or nothing to protect homeowners in that way.  (But see this and this.). When I asked her she would do about traffic suggestion, Darnelle suggested eliminating tolls on roads. (Wouldn’t that mostly just increase traffic?)    I believe Darnelle has little chance of winning against Kuderer.  No Republican candidate survived the top-two primary.  This is Darnelle’s fourth run, I believe she said.

On February 21, 2011 I traveled from Seattle with three progressive friends to hear Dennis Kucinich speak on “The True Cost of War” at the Capitol Theatre in Olympia, Washington. As we drove in the fuel-efficient Prius, we left a trail of sticky smugness behind us in the aether. Kucinich was preceded by a peace […]

Health Care Is Not Just About Insurance

We have to take the profit motive out of providing health care. Insurance companies are corporations required by law to produce maximum return on investment for their shareholders. This leads to excluding people with pre-existing conditions, failure to provide health care for low-income children and their families, and lifetime caps on coverage that cut off […]

One Reply to “Report on the AAPI candidates forum with state senate candidates Dhingra, Englund, Kuderer and Darnelle”