There’s something that’s always perplexed me about forgiveness, and I finally think I’ve figured it out.

Most people who talk about forgiveness say that it requires a change in our attitude towards the offending character.  They also say that by forgiving that person for what they did we can free ourselves from the pain of resentment and victim-hood. Or they say we release the other person from the burden of our anger.

But I think that in order to forgive, the primary thing we need is to stop feeling hurt. We first have to stop doubting ourselves.  Our attitude to the other person is entirely secondary.

It’s not our hatred and anger towards the other person that entraps us. It’s our feeling hurt that traps us: feeling that something is wrong with us or with the world.  We may attach or project the source of our suffering on the other person, and overcoming our suffering will require us to get beyond feeling like a victim. But the important inner move doesn’t involve forgiveness; rather, the important inner move is that we come to stop identifying as the victim who has been hurt and is unworthy. 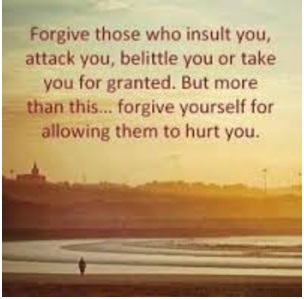 So, the flip side of forgiveness is that we need learn to trust ourselves and to disbelieve the bad things they said about us or “made” us feel about ourselves.

People say that we need to let go and forgive.  That carries the suggestion that our anger is vengeful.   I think what’s usually missing in such discussions is that the reason we can’t forgive is because we partially believe them when they say we’re bad. We believe that we are unworthy.  So forgiveness requires us to trust and love ourselves.

When we’re filled with anger and resentment, we’re often struggling, I think, to maintain our self-esteem. We’re feeling bad about ourselves.

Now, I’m talking here about forgiveness for acts of betrayal and emotional hurt.  When the other person did something truly horrible — such as causing physical harm  or a major betryal by a spouse — then the hurt may require a different sort of forgiveness and I’m not confident my analysis applies.

When someone belittles us, we struggle to defend ourselves. But part of us buys into the attack.  Like a skilled judo master, a skilled belittler enlists their enemy in the attack.   We feel bad, and to some extent so we project the cause of our suffering on something that happened to us.   Yes, they hurt us, but we over-react.

Physical injuries cause us to withdraw from the source of the damage and to avoid it in the future.  Emotional injuries cause us to withdraw and flee mentally in a similar way. When we over-react it’s akin to an auto-immune disease of the mind — a metaphor that occurred to me suddenly the other day. But it’s still a mystery to me why our defenses often attack us so harshly. Many people feel bad about themselves. (I heard the Dalai Lama had trouble comprehending why so many westerners are full of self-loathing; apparently such self-hatred is rarer in the Orient.)  When we feel hurt, we need to stop feeling bad.  Only then can we forgive the other person.

One of my coworkers is from the former Soviet Union. He said he was drafted into the Soviet army.  At training camp some of the tough recruits enjoyed beating up weaker guys.  Some of the bullied recruits killed themselves by jumping out of windows.    I suppose life was so horrible that they wanted to destroy themselves to escape the suffering.  When we are hurt by others we start to attack ourselves. Rarely do we react as strongly as those recruits.

Recall the pain of being wronged, the hurt of being stung, cheated, demeaned. Doesn’t the memory of it fuel the fire of fury again, reheat the pain again, make it hurt again? Suppose you never forgive, suppose you feel the hurt each time your memory lights on the people who did you wrong. And suppose you have a compulsion to think of them constantly. You have become a prisoner of your past pain; you are locked in a torture chamber of your own making. Time should have left your pain behind; but you keep it alive to let it flay you over and over.

… you become addicted to your remembrance of pain past. You are lashed again each time your memory spins the tape….

That’s a powerful description of feeling hurt and resentment.

Smedes tells stories of people who needed to forgive past cruelty: betrayals by coworkers that cost someone their job,  husbands cheating on their wives, mothers who hated their children, families killed in genocide.  Depending on the details, forgiveness can seem unwarranted and a betrayal of our need for settling scores.

But when Smedes goes on to talk of the solution to such suffering, he misses something.

The only way to heal the pain that will not heal itself is to forgive the person who hurt you. Forgiving stops the reruns of pain. Forgiving heals your memory as you change your memory’s vision.

When you release the wrongdoer from the wrong, you cut a malignant tumor out of your inner life.

What’s missing is the need to recover one’s self-respect: to stop believing the bad things they said about us or made us feel.

Smedes says that we need to feel forgiven to be free. Maybe that is something that Christians feel they need — forgiveness. It’s not something I can relate to very much. I don’t feel that I have sinned. I often feel that I’ve done stupid things, and I worry that I’m not smart and competent enough. But I don’t feel burdened with guilt and sin.

Another thing that bothers me about talk of forgiveness is that the act of forgiveness seems pompous — as if my forgiving the other person helps the other person in some way or as if my being able to forgive shows God that I’m a good person.   When someone we love or trust harms us badly, we may get beyond hot anger and hurt, but we are unlikely to deeply trust or actively love them again.        Can anyone really love their enemies?  Only perhaps if they love themselves again — or become enlightened and so transcend having a self (ego) to protect and feel bad about.

“Walkable City: how downtown can save America, one step at a time”, by Jeff Speck, was exciting to read. Speck presents all sorts of evidence and arguments that walkable downtowns — designed for people, not cars — increase real estate values, increase tax revenue, improve health, attract businesses, and make for fun places to live. […]

The minister at my local Unitarian Universalist church said in a sermon that left-leaning folks should stop calling gun-rights advocates names such as “gun nut” and “moron.” She said that it sure is tempting to insult them, but it’s counter-productive. Her words got me thinking. After the sermon, I asked her about it. I said, […]

One Reply to “On forgiveness, self-esteem, and auto-immune diseases of the mind”