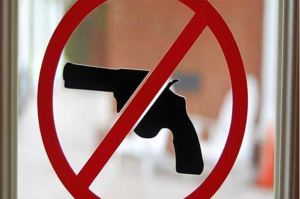 If the only thing that can stop a bad guy with a gun is a good guy with a gun—or better yet, lots of good guys with guns—then it goes without saying that the contentious GOP convention should be prickling with weapons: rock hard glocks, pen-sized pistols, and a whole array of AKs strapped across the backs of brave men who are ready to spray anything that moves with a shower of lead.

With threats on all sides, from Muslims and Blacks to feminists and federal wildlife agents, the only way to make America safer again is more guns. So we are told after each mass shooting. Surely the GOP wouldn’t hold their convention in a place that fails to allow the kind of enhanced security that is so dear to conservative hearts, so core to the Republican political agenda, and so necessary to keep Americans safe.

Four months ago, a Second Amendment activist or troll going by the moniker Hyperationalist realized that Quicken Loans Arena in Cleveland, site of the GOP convention, bans firearms on the premises. It’s the equivalent of the Democrats holding their convention at a place that bans collective bargaining for its workers, and Hyperationalist was outraged. He created a Change.com petition, quoting the NRA about the dangers of “gun-free zones” and demanding that Quicken Loans Arena change their policy, at least for the convention.

This is a direct affront to the Second Amendment and puts all attendees at risk. As the National Rifle Association has made clear, “gun-free zones” such as the Quicken Loans Arena are “the worst and most dangerous of all lies.” The NRA, our leading defender of gun rights, has also correctly pointed out that “gun free zones… tell every insane killer in America… (the) safest place to inflict maximum mayhem with minimum risk.” (March 4, 2016 and Dec. 21, 2012)

Although it was unclear at the time whether the petition was the work of an aggrieved gun lover or a public safety advocate trying to make a point, it quickly gathered 55,000 signatures from folks on both sides of the aisle. If the point of the petition was to advance an expansive interpretation of Second Amendment rights, it failed. Republicans who show up at the convention next week with weapons will be stripped at the door of their arsenals, no matter how large or small.

In a July 14 letter to supporters, Hyperationalist conceded:

Apparently in Crooked Hitlary Clinton’s “politically correct” libtard America, some people would rather not be surrounded by high-powered semi-automatic assault weapons with high-capacity cartridges—and so the oppressive policies of Barack HUSSEIN Obama’s regime remain in place.

If the point of the petition was to show the public that Republican rhetoric about more guns making us all safer is utter bullshit, then it succeeded wildly, because the contrast between what Republican policy makers say they believe and actually believe couldn’t be on brighter display.

Republican leaders know full well that a convention hall teaming with mutually antagonistic adrenalin-jacked open- and concealed-carriers could be the safety equivalent of a convention hall decorated with gas cans and matchboxes. They may sell their souls for NRA dollars—they may be willing to sacrifice the 33,000 Americans a year who die from guns (interactive graphic here from Nate Silver), but they’re too hypocritical to actually put their own bodies on the line. Confronted with the prospect of their own mortality, they know that the right to life trumps the right to bear arms, even if they’re too candy ass to say it.

These are the people who have been demanding that guns be allowed on college campuses, in hospitals, in churches, in public parks . . . everywhere but the halls of Congress and the RNC. They have proposed that kindergartens would be safer if the teachers were all armed. They have fought for the right of suspects on the terrorism-watch and no-fly lists to stockpile firepower.

But they couldn’t bother to take on Quicken Loans or move their convention elsewhere because, in reality, they want the kind of safety they’re unwilling to grant to rest of us. They want to know that if someone around them is struck by a fit of rage or temporary insanity, or falls into a black hole of paranoia and decides he is surrounded by the hordes of evil, or wants to suicide in front of a bank of cameras, or aspires to go down in history as a hero or anti-hero—he’s going to have to pull off mass murder with his bare hands. They want to know that, to the best of professional standards, the crowd of strangers around them is unarmed, because they know that most bad guys with guns are good guys with guns until the moment they point at an innocent person and pull the trigger.

Which Trump ticket is your favorite?

From Callista Kline: My brother’s response to my mom’s email about the recent shooting. I want to share, particularly because of the way he explains things. As a veteran and a gun owner, he knows much more about guns than I do. Hopefully his arguments and information can help any of my friends trying to […]

Why we need criminal background checks: a resolution