The House Democratic caucus in Washington State supported Democrat Matt Larson over Darcy Burner in the 5th LD primary for House seat position #2.  Darcy is a strong progressive. She worked in D.C. as Executive Director of Progressive Congress and has a big following. The Democratic Caucus contributed $50,000 to Matt Larson. Later, after Darcy trounced Larson in the primary (11,014 to 5,056), the Dem Caucus donated only $20,000 to Burner.

Before the election I’d heard mumblings from a Democratic operative that Darcy was too far left, and after the election this same operative defended the caucus’s decision, saying that Larson would have been more electable. 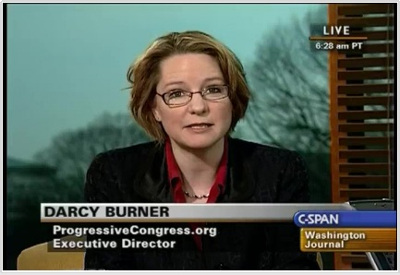 I was told by a knowledgeable source that the Democratic caucus also refused to support Jason Ritchie for state House because he refused to be critical of Darcy.

I asked Jason Ritchie about this, and he agreed that the HDCC didn’t want either him or Darcy in the caucus, so they didn’t target the races for support. He also agreed that both seats were winnable, as the district is trending blue. He went on (telling me I may quote him):

Labor allies stood behind my campaign 100%. I was endorsed by Bernie Sanders and Our Revolution. The problem is the HDCC and the entrenched elite who are not listening to the grassroots. Progressives and Labor need to stand together, not fight against each other, to oust the current leadership and reestablish our party as it was founded, progressive and working class champions. 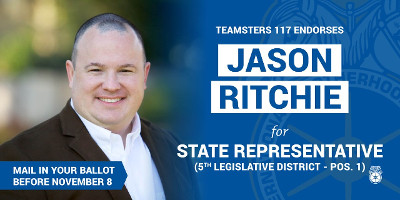 Here are details about the donations. In the 5th LD primary for House seat position #2, the Democratic Caucus contributed $50,000 to Matt Larson, Darcy’s Democratic challenger.

In the other 5th House race, Jason Ritchie was the only Democratic primary candidate.  Republican Jaye Rodney beat Jason Ritchie 37,772 to 34,954 in the general election. That was even closer.

Fact is, the caucus (especially Frank Chopp) tends not to like progressive candidates.

They chose former Republican Rodney Tom over a good Democrat, leading to the Republicans taking over control of the state Senate. State Democratic chair Dwight Pelz later regretted this.

Fact is, the Democratic caucus is wishy-washy on Democratic Party principles:  Frank Chopp allowed Steve Litzow’s charter school bill SB 6194 to come to a vote; over a dozen Democrats voted for it; and Governor Inslee allowed the bill to become law. Despite its being unconstitutional!  See These Dems voted to undermine public schools, contravene the Constitution, and aid Republicans.

In 2012, after Dennis Kucinich’s seat was redistricted out of existence, he visited Washington State to investigate running for Congress here. But Pelz opposed Kucinich’s move and ridiculed him,  angering many progressives.

A similar sellout was the recent votes by Senators Murray and Cantwell against Bernie Sander’s bill to allow re-importation of pharmaceuticals from Canada. There is an effort underway among Democrats to pass a resolution, or possibly a censure, about this issue.   Yes, Trump’s upcoming inauguration is a dark day for America. No, that’s no excuse for selling out principles for the sake of campaign money from corrupt drug companies.

It’s sellouts like these that confuse the voters, cause low turnout, and contribute to GOP victories and defections to the Greens and Socialists.

Why Washington State Should Adopt a BC-style Carbon Tax

Editor’s Note: Washington’s Carbon Emissions Reduction Taskforce is on the job, weighing alternative carbon-pricing proposals. Some members of the panel have asked what our ideal policy would be for Washington State. Yoram Bauman shares his thoughts today. Alan Durning will share his argument for a California-style cap-and-trade system, with key modifications, another day. If I […]

If your friend told you that she could get a payday loan of $700, and that the interest would be 36 percent, plus a small loan origination fee of 15 percent, plus a monthly maintenance fee of 7.5 percent, you might advise her to get out her calculator. Here’s why: That $700 loan could cost […]