Our nation’s lax gun laws have led to another mass shooting.    USA Today is reporting that the Florida shooter Omar Mateen

used a .223 caliber AR-type-rifle and 9 mm semiautomatic pistol… The FBI had investigated Mateen twice before the shooting, but found inconclusive evidence and were not able to charge him with a crime.

The AR-type-rifle Mateen used to slaughter 50 people at the Pulse nightclub, is known for it’s [sic] lethality and has been used in other mass shootings in the United States.

Adam Lanza, the gunman behind the 2012 Sandy Hook Elementary School shooting, used an AR-15 and its 30-round magazine to kill 26 people in under five minutes. And it’s not just the AR-15, but semiautomatic weapons of all kinds that can be remarkably efficient killing machines.

At Virginia Tech in 2007, Seung Hui Cho shot 47 people in 10 to 12 minutes, using two semiautomatic handguns with magazines that held no more than 15 bullets.

Last December, the U.S. Senate voted down an amendment that would have kept suspected terrorists from purchasing firearms.

At that time Paul Ryan “signaled that barring gun purchases by people on no-fly terror lists — as President Obama urged Wednesday — is not an option. Ryan said government officials put people on such lists without any due legal process and so denying those listed the right to bear arms would violate their rights.” 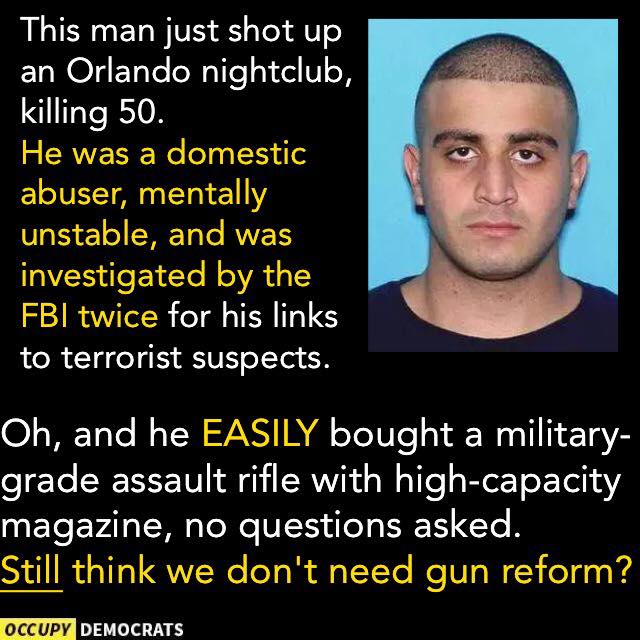 An example of how Repugs want government to fail

Cities Are Teaming Up to Offer Broadband, and the FCC Is Mad City governments can offer Internet faster and cheaper than the private market can. Repugs hate this idea because it contradicts their deeply held dogmas. The same is true for health care: government-run systems in Europe are cheaper and have better outcomes. Comments comments

3 Replies to “Conservatives kill again: they value gun rights more than the right to life”