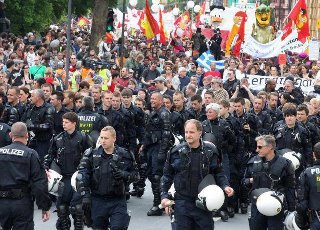 From Occupy Frankfurt. May 19, 2012.
The German police took off their helmets and marched with the protest clearing the way for them.

Thought you may like to have this image as well…

The police coming over to serve and protect the people… Blockupy Frankfurt. Police are escorting, not participating. Reports of an estimated 20,000+ protesters. Nice to see their faces…. and their humanity coming through…

German police officers escort an anti-capitalism protest march with some 20,000 people in Frankfurt, Germany, Saturday, May 19, 2012. Protesters peacefully filled the city center of continental Europe’s biggest financial hub in their protest against the dominance of banks and what they perceive to be untamed capitalism, Frankfurt police spokesman Ruediger Regis said. The protest group calling itself Blockupy has called for blocking the access to the European Central Bank, which is located in Frankfurt’s business district. (AP Photo/Michael Probst)
source: http://www.globalwinnipeg.com/world/20000+people+march+at+a+frankfurt+occupy+protest+german+police/6442644693/story.html

Dear supporters, I wanted to update folks with the latest news from the taskforce. We are having another task force meeting Nov 1 in Olympia at 9:00 am in Senate Conference Rooms A, B, C. You can find the agenda for the meeting here on our website. Remember, if you can’t make it to Olympia […]

Stand Up For Democracy, Stop the TPP

The situation is dire, but the GOP is fragile

As things stand, there is a good chance that Republicans will take control of the House of Representatives in 2022, thanks in large part to gerrymandering and to changes in election laws in Republican states. One recent poll suggests that up to 2/3rds of Republican voters believe that the 2020 election was stolen, and about […]