The approval rating of Congress is now below 15%, according to several polls, as reported here.

No wonder. The corruption, mismanagement, brutality, and stupidity of our political leaders, especially those in Congress, is phenomenal.   People feel that the political system is broken. It’s so corrupted by money, a stacked Supreme Court, vote rigging, and media manipulation that people have given up on the electoral system and are taking to the streets.

But a shocking thirty-eight percent (38%) of voters have a favorable opinion of House Speaker John Boehner .  So, a huge percent of voters still support Republicans.   Moreover, a mere 10% believe the government spends taxpayer money wisely and fairly. The fact that Republicans are the ones who’ve been most responsible for government waste and corruption seems to escape many voters.

In 2008 people turned to Barack Obama as as leader who would steer the nation on a new path. Instead we got a Wall Street Democrat whose entire economic team was composed of senior Wall Street executives and Bush holdovers.  Instead of prosecuting Bush-era criminals and putting the GOP on the defensive, President Obama coddled Republicans, coddled Wall Street, and prosecuted only whistle blowers.    Due largely to Obama’s many compromises and sellouts, Democratic turnout was low in 2010 and the Democrats got a shellacking.

Forty-two percent (42%) of voters Strongly Disapprove of President Obama’s performance, according to Ramussen;  44% still approve.   Galluup reports a disapproval rating of 43% for the president.

The Republican crop of candidates for president is truly horrendous, but what a shame that the leading Democratic presidential candidate’s best case seems to be “Not as bad as the Republicans, whom I blame for all my problems, though I bent over backwards to protect them, though I compromised early and often, and though the country voted in 2012 for real change.”

None of the Above

There’s a movement afoot to promote None of the Above (NOTA) as a ballot option. According to the Wikipedia article, NOTA is “designed to allow the voter to indicate disapproval of all of the candidates in a voting system. It is based on the principle that consent requires the ability to withhold consent in an election, just as they can by voting no on ballot questions.” Ukraine, Columbia, Spain, and Nevada have NOTA options on their ballots.

In some jurisdictions, if a plurality of voters vote for NOTA, then a new election is held.

http://nota.org and Vote for None of the Above are websites devoted to promoting NOTA. 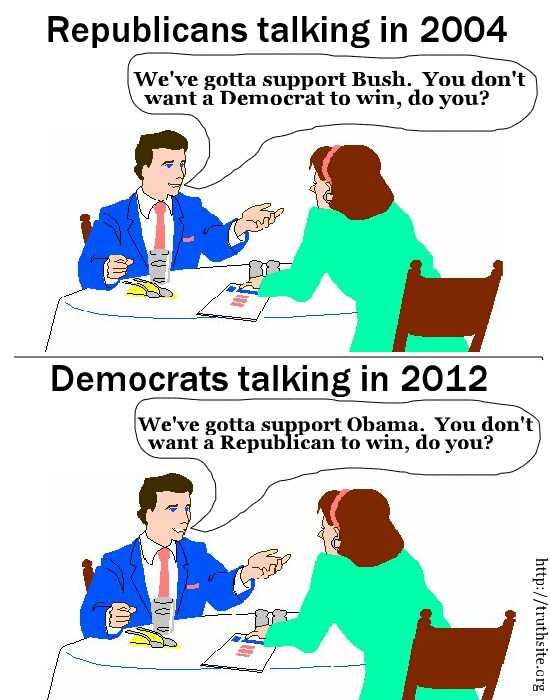 “In exchange for ravaging the most popular and successful programs Democrats have ever produced, and for a vital chunk of nearly every American’s retirement savings, Barack Obama’s grand bargain would have meant accepting an entire economic philosophy diametrically opposed to the one he had run on. For the most basic principles of public life to […]