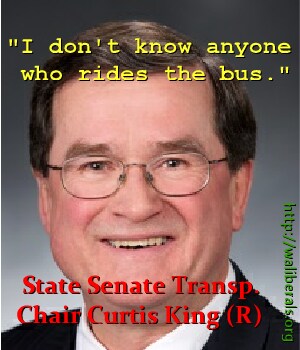 In 2010 Washington State voters rejected I-1098, which would have established an income tax on the wealthiest 1 or 2% of citizens. And the voters approved I-1053, which makes it very hard for legislators to eliminate unfair tax exemptions that benefit the richest corporations.  In this video a middle class guy explains his votes against […]

On the local option for transit funding

At the Bellevue forum on transit funding, Rep. Judy Clibborn described how a Republican legislator probably won’t support the local option for transit funding that is being considered by the legislature, HB 1954. According to that bill, King County, for example, could tax locally to support Metro Transit, which will otherwise have to cut service […]