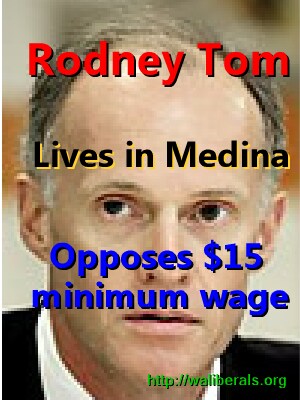 Noisy protesters should target his house in Medina.  I’m thinking of the raw, Seattle area protesters who like to get arrested.

I wonder if  such people would be willing to get involved in what might seem to them to be partisan politics.  For example, if the Democratic Party were sponsoring the protest, I bet that some of them (Occupiers, Socialists) would boycott the protest.  This is sad, because the Republican Party (and ex-Republican Rodney Tom) are greatly obstructing progressive legislation.

The apparent hostility between Democrats and those further to the left is the defining problem of the progressive movement and the Democratic Party.

SLOG has an announcement for a rally in support of the $15 minimum wage. “Sterling Harders, vice president of SEIU 775NW; Dave Freiboth, executive secretary of King County Labor Council, AFL-CIO; Kshama Sawant, Seattle City Council member; Socialist Party member of the Irish Parliament for Dublin; Robby Stern, former co-chair of McGinn campaign; fast food workers and employees at the airport, and others who are being booked right now.” More Dem speakers would be good?

One of the things I do in the fall is volunteer as a coach for cross country runners at Ballard High School. I usually end up coaching the kids at the end of the pack. That’s how it should be. Because with cross country, it’s not just about the fastest runners, it is also about […]