According to All Income Growth is Going to the Richest 1 Percent of Washingtonians :

It’s time for policymakers in Washington state to take steps to reverse decades of widening economic disparities that threaten broad prosperity, now that it has again been shown that all income growth since 2009 continues to flow to the wealthiest Washingtonians.

An updated report from the Economic Policy Institute (EPI) shows that the richest 1 percent of households – those making over $388,000 a year – captured all of the new income generated in Washington state between 2009 and 2013 (see graph). By contrast, and in a stark reversal from past decades, average incomes among the remaining 99 percent of Washingtonians declined during this period, causing far too many hardworking families to fall even further behind. 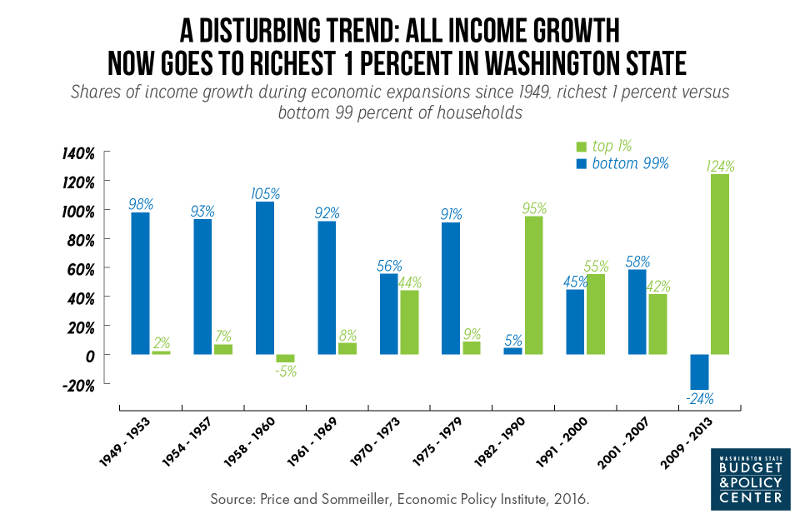 Making most of 2012 means acting, not sitting

If there’s a single lesson to be drawn from the events of 2011, it’s this: Democracy is based on acting and doing, not sitting and watching. The actions of a sole protestor in Algeria, magnified by thousands of others, toppled dictators in Algeria, Egypt and Libya. People did not just watch — they marched, they […]

Too cheap, too expensive

See also Killer Fact: 30-40 Percent of Health Care Spending in the U.S. Is Tied to Excess Sugar Consumption: And our political system does nothing but subsidize the problem. For the Love of Money “In my last year on Wall Street my bonus was $3.6 million — and I was angry because it wasn’t big […]