Tonight I went to a fundraiser for Marie Gluesenkamp Perez, who is running for Congress in Washington’s 3rd Congressional District.

Perez’s opponent is Joe “America First” Kent, a far right MAGA Republican endorsed by Donald Trump.  Kent appears frequently with Steve Bannon and with Tucker Carlson.   He supports crazy conspiracy theories. He has called the Covid vaccine an “experimental gene therapy” and wants to investigate Anthony Fauci over COVID-19 and Trump’s loss in the 2020 election, which he continues to question. Kent allegedly had a Proud Boy on his payroll.

The 3rd Congressional District, near the Oregon border, is mostly rural and leans Republican, but Democrats believe Perez has a chance to win, because Kent is so extreme and because demographic changes and migration have made the district less Republican.

At the fundraiser incumbent moderate Democrat Suzan DelBene (WA-CD1) spoke on behalf of Perez. Before DelBene’s speech I asked her to sign Rep. Pramila Jayapal letter calling for a negotiated end to the war in Ukraine. DelBene said she hadn’t heard of the letter. “There are so many letters going around, ” she said.  I explained, “There’s a risk of a nuclear war. Don’t we need a negotiated solution?” She replied that the U.S. can’t allow Putin to get away with taking land illegally.

DelBene’s rural district CD1 is adjacent to Pramila Jayapal’s district, the 7th, which encompasses most of Seattle. You’d expect Jayapal to ask her seatmate to support it, if her heart is in it and if she thinks there’s a chance that DelBene would support it.  Jayapal is the Chair of the Congressional Progressive Caucus. DelBene is Chair of the moderate New Democrat Caucus.

Here’s a photo of DelBene introducing Perez, who is seated. 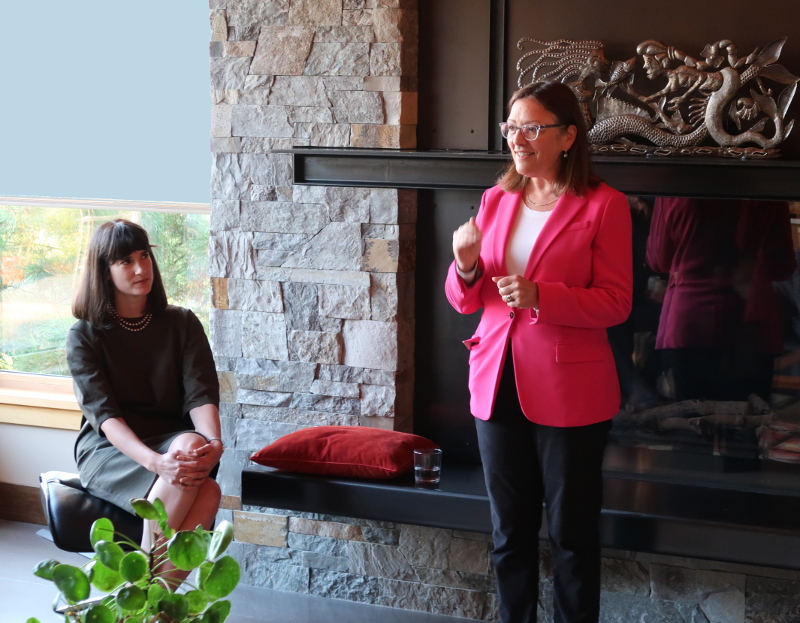 Hearing that, I lost all hope of talking more with DelBene about Ukraine.

Indeed, every Democrat in Congress (and Independent Bernie Sanders) voted for sending military aid to Ukraine.  But 11 U.S. Republican senators and 57 Republican House members voted against giving $40 billion towards Ukraine’s war with Russia (the U.S.’s proxy war with Russia). See Warning to Dems from antiwar conservatives: Dems’ militarism “is going to bite them pretty hard very soon” and American Conservative’s Uncle Sam’s Long Trail of Wreckage. There are antiwar MAGA Republicans and antiwar libertarians but almost no antiwar Democrats in Congress nowadays.

Due to guilt by association, peace activists who call for a negotiated end to the war in Ukraine or who point out how NATO expansion contributed to the crisis are marginalized.

Exposing the sociopathic mercilessness of the banks

EXPOSÉ When we started Jeremy Griffin’s eviction campaign at his South Park home, it seemed only reasonable to discuss our concerns with James Gorman, Chairman and CEO of Morgan Stanley. When Mr. Gorman’s staff learned we were sullying their good name in the streets of Seattle, they called Jeremy to assure him that they in […]

Can Rep. Adam Smith move the needle on military spending, secrecy, and adventurism?

Starting in January, Rep. Adam Smith (WA, D, 9th CD) will be the Chair of the House Armed Services Committee. Rep. Adam Smith is called a progressive, and a great hope for pacifists, in this Politico article Democrats going nuclear to rein in Trump’s arms buildup. (The title they chose for the article is rather […]

About the war in Afghanistan, from "The Operators" by Michael Hastings