Look what we have accomplished together! – (see the media roundup below) 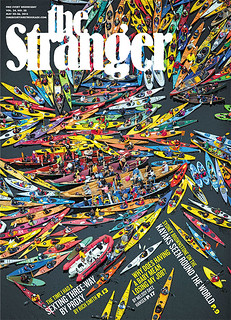 Led by the beauty and spirit of the moment,

Emboldened by the drums and wise words of the Duwamish and Native Canoe families and the voices of those on the front-lines of the climate crisis,

Driven by a moral obligation to take principled and bold action in service of a habitable planet and younger generations.

300+ people (and countless others on land) took to the water, paddling straight to Shell’s Arctic destroyer to demand climate justice.

It is in these moments that we solidify the courage to act upon our convictions. The Paddle In Seattle has seized headlines across the world and has inspired others to join the movements for climate justice.

Thank you for sharing in our vision and for striving to manifest it. Collectively we have done something truly beautiful and powerful. 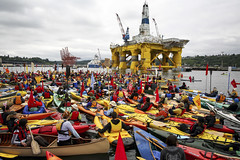 Now, we must use this momentum and spotlight to push onward.

Right now, we are resuming kayaktivist trainings and organizing a rapid response network for when Shell dares to leave for the Arctic. We’re also connecting the solar powered People’s Platform with upcoming night-time paddle actions. 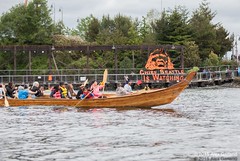 The news from the weekend made national and global headlines in addition to completely saturating Seattle media (best- KOMO 4 TV, KIRO 7 TV, Q13 Fox TV, Stranger, Seattle PI, West Seattle Herald) This has completely changed the conversation around Arctic drilling and rocketed it to being a top national and even international issue. Even Obama found himself extolling the virtues of protecting the Arctic at a USCG Academy commencement address.

Here are a few highlights: on Saturday, the protest was #3 on BBC World News (right beneath the ISIS raid and Morsi’s death sentence, to give you perspective). The Guardian went wild with coverage as well (here, here, here, and here) and it even reached Australia!

The Associated Press story was picked up in nearly every major paper across the country from Atlanta to Minneapolis to Dallas and on ABC and Yahoo news.

The coverage from the NBC affiliate, King 5 TV, was picked up nationally.

The photos were particularly well-traveled with even Leonardo Dicaprio posting the aerial kayak photos on his Instagram.

Here is a roundup of the photos from Grist.

The speeches all came from native and impacted people telling us powerful truths. In fact, after traveling to Seattle from the North Slope, Mae Hank and Faith Gemmill-Fredson – founder and executive director of the grassroots indigenous network REDOIL- confronted Shell at the AGM meeting in London. Faith spoke directly to Shell shareholders saying “The moral and financial burden of the irresponsible decision to drill in the Arctic is too risky to consider.” 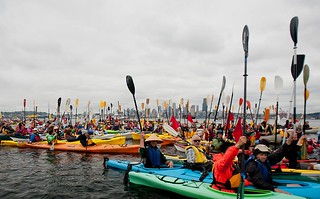 Arctic drilling dominated the coverage of the meeting, casting serious investor doubt on the project.

Earlier in the week, Kayaktivists were live on MSNBC’s Chris Hayes, followed by an amazing segment on Rachel Maddow during which she spent several minutes reading out-loud the riveting and terrifying piece “The Wreck of the Kulluk.”

The Monday following the actions, there was even more national coverage. Here are just a few of the highlights: USA Today, NPR, Slate. 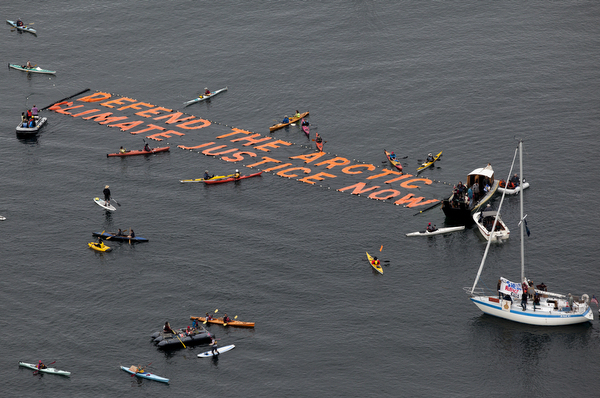 WE NEED YOUR SUPPORT!

Wells Fargo, you can't hide. Everyone can see your greedy side!

Five members of SAFE (Standing Against Foreclosure & Eviction) were arrested Tuesday at a downtown Seattle branch of Wells Fargo as they protested the imminent eviction of Jeremy Griffin from his South Park home. While sitting in the bank’s lobby, the five chanted “We Shall Not Be Moved” and read a letter from Mr. Griffin […]

Global warming, big hurricanes. Any questions? Governor Rick Perry – please report to the North Carolina Coast to pray this huge storm away. For those of you hanging over on the right coast, move to high ground. Find a dry place and stay safe. Think about the long term impact of global warming and what […]