I’m reading David Stockman’s book The Great Deformation — the Corruption of Capitalism in America. Stockman was Reagan’s Director of the Office of Management and Budget. He criticizes the GOP for its militarism and its whoring for the rich. He says there was no need to bail out Wall Street. The speculators who would have lost out deserved to lose and the contagion wouldn’t have spread beyond the canyons of Wall Street. 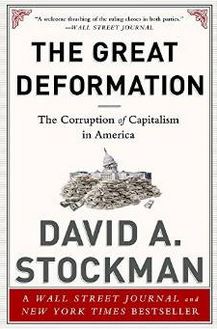 Progressives would agree with much of what Stockman has to say.

“[T]he Republican Party was hijacked by modern imperialists during the Reagan era. As a consequence, the conservative party cannot perform its natural function as watchdog of the public purse because it is constantly seeking legislative action to provision a vast war machine of invasion and occupation.” (p 688)

“The Republican Party has totally abdicated its job in our democracy, which is to act as the guardian of fiscal discipline and responsibility. They’re on an anti-tax jihad — one that benefits the prosperous classes.”  “How the GOP Became the Party of the Rich”. Rolling Stone.

But Stockman is a true conservative.  He doesn’t believe the government should be involved in bailing out business or stimulating the economy.  He opposes Keynesian macro-economic policies and thinks that government does more harm than good when it meddles.  He also opposes Social Security, Medicare, Medicaid, and the minimum wage.

“At the heart of the Great Deformation is a rogue central bank that has abandoned every vestige of sound money. In so doing, it has enabled politicians to enjoy ‘deficits without tears’ by monetizing massive amounts of public debt.”

Stockman calls the bailout, the stimulus, and the Fed’s printing of money “a de facto coup d’etat by Wall Street” whose purpose was to re-inflate the financial bubble.

“The Detroit-based auto industry was debt-enfeebled house of cards that had been a Wall Street playpen of deal making and LBOs for years, including my own. ”  He thinks the there needs to be a rollback of the “preposterous $100,000 per year cost of UAW jobs.”

Stockman spent twenty years after leaving the White House in the leveraged buyout business.  He was indicted for fraud when a business he invested in went bankrupt. After a two year battle, prosecutors decided to drop charges. Stockman says the business failure was due to stupidity (his) and market decline, not fraud.

In the last chapter, Stockman proposes the following radical policy changes which, he admits, have almost no chance of being enacted in the current political climate.  Some of the changes (such as overturning Citizens United, the establishment of federally funded elections, and a wealth tax on the rich) would be eagerly welcomed by progressives. Other changes (such as the elimination of Social Security, Medicare, and income taxes) would be strongly opposed by progressives.

By the way, Stockman isn’t the only former Reagan economic adviser to argue against GOP tax policy. Former Labor Secretary Barry Bluestone thinks the GOP tickle-down economic policy is a failure. He says “The wealthiest people spend maybe 30% of their income. Poor people spend 100%, working people spend 98%, so as we move money away from working families towards very wealthy families, we take more and more consumption out of the economy, means slower and slower growth, means higher and higher an extended unemployment.”

Who incited Christian terrorism?  Not me.  Couldn’t be. In what could be the greatest hypocrisy in a season of head-spinners, Christianist Republicans—from presidential candidates to congressmen to Fox News bimbos to sleazy video-splicers and wild-eyed sidewalk ranters-with-rosaries—are scrambling to deny that what they say actually matters. Specifically they claim that they had nothing to do with a […]

Two weeks ago, Gov. Chris Gregoire convened a press conference with corporate leaders from Microsoft and Boeing. They were celebrating a breakthrough in higher education. It was a breakthrough, all right — like 60,000 high school graduates walking out onto thin ice and breaking through. The troika offered a life ring for 1,000, through “Opportunity […]

In order to obtain emergency funding for public transit, the King County Council, specifically, Larry Phillips, has proposed a congestion fee of $20 to be charged for every automobile.  I am writing in strong opposition to this fee and hope that others will also oppose this regressive tax and testify at the upcoming hearings unless […]