Anti-abortion activists like to call embryos “unborn children”, “innocent babies” or “developing human beings.” Their obvious aim is to shame people into believing that abortion is murder. But just repeating these phrases doesn’t change any facts and shouldn’t change any opinions. There are clear differences between early term embryos and late term fetuses. Specifically, a fertilized egg has no nervous system and hence no consciousness. The nervous system develops gradually, over many months, and along with it consciousness develops gradually too. Until there is significant brain development, there is “nobody home,” so no consciousness is being destroyed.

Why do pro-lifers think that embryos become precious immediately after conception? Does a switch get turned on that instantly makes the fertilized egg precious? I mean: not just precious in onlookers’ eyes, but inherently precious.

Nor does the later presence of a heartbeat and of primitive neural activity imply consciousness or preciousness. What’s needed is higher brain activity and the consequent self-awareness.

Now, I grant that nobody knows for sure what consciousness is — philosophers have been speculating about the nature of consciousness for years, and scientists haven’t yet tackled the issue. But it is quite clear that consciousness does not emerge full-grown immediately after conception. And since I believe in science, I have to presume that consciousness emerges with the gradual development of the nervous system.

So sure, an embryo is a growing human being. Sure, it’s a potential person (as are an unfertilized egg and sperm). But it’s not yet a conscious person and hence not yet inherently precious. That’s the distinction.

We generally reserve the word “human” or “child” to refer to a thinking, feeling being. So calling an embryo an “unborn child” is odd, since it masks clear distinctions between an (unconscious) embryo and a (thinking, feeling) child.

Now, if you believed that a “soul” enters the embryo at conception, then I could understand that you’d likely think abortion is murder. But I doubt that pro-lifers want to depend on an essentially religious argument.

In short, pro-choicers can say: abortion isn’t murder because until there’s a mature nervous system, there’s no conscious person, just a potential consciousness (a clump of cells). Nor is there any pre-existing (dormant) consciousness, as there’d be in the case of a sleeping or comatose person.

Given that the development of the nervous system and consciousness is gradual, when does the embryo become conscious enough to be considered a person (a precious human being)?

Some anti-abortion activists concede that the maturation of the nervous system is gradual. They acknowledge that there’s no clear line (cutoff) between non-consciousness and consciousness. Therefore, they argue, it’s arbitrary to say that life begins at, say, three months; far better, they argue, to play it safe and say that life begins at conception, which is non-arbitrary. In other words, anti-abortion activists say that setting a cutoff later than conception is arbitrary.

I agree that there’s no precise place to draw a line, because development is gradual. However, this doesn’t imply that we have to draw the line at conception or that it’s completely arbitrary to draw a line later in development.

The word “arbitrary” is ambiguous. It can mean “completely arbitrary” (meaningless, or random), or it can mean “partially arbitrary” (smudgy, fuzzy, or imprecise). It’s the latter sense that’s operative here when we’re talking about embryonic development and consciousness.

For many things in life we need to decide on thresholds to separate two classes. For example, in some schools a grade of 90 or above counts as an ‘A’. That’s somewhat arbitrary, but not completely arbitrary. Other schools decree that 92 or above is an ‘A’.

Likewise, if you drive faster than 60 miles per hour on some particular road, the police may give you a speeding ticket. Why not 62 mph or 58 mph? Well, the decision is somewhat arbitrary, but it’s based on a variety of considerations (including the fact that 60 is a nice round number).

Likewise, it’s somewhat arbitrary to say that life begins at three months, as opposed to two months, or four months. But it’s always like this for things that are gradual — for things that have a continuous gradation (“a smudgy line”).

Right after conception the embryo is not viable, not conscious, and hence not inherently precious. The fact that there’s no clear line certainly does not imply that we have to draw the line at conception; it just means that if we need to set a precise line, its position will be somewhat arbitrary.

Even the presence of a heartbeat and the presence of primitive neural activity don’t imply that the embryo is significantly conscious. What’s needed is a developed nervous system with higher brain activity.

In summary, the criterion of being conscious is fuzzy (gradual, smudgy or imprecise) but not totally arbitrary. Some things are definitely unconscious, some things are clearly conscious. There’s a continuum from complete unconsciousness (rock or fertilized egg) to full consciousness (laughing child). To decide when (precious) human life begins, we need to decide on a cutoff. For someone like me who thinks that preciousness involves consciousness, abortion is quite reasonable: close to conception, consciousness is absent or extremely primitive.

Decreeing the meaning of life and death

The case is similar with end of life questions. There is disagreement about what precisely constitutes brain death, but the general idea is that when there’s no brain activity, and when the nerve cells have become irreparably damaged, it’s OK to withdraw life support. Opinions differ as to whether it’s sufficient for the higher brain centers to be dead or whether the lower brain centers too must be dead. Indeed, people who believe that abortion is murder tend to hold stricter views about how completely brain activity must be absent before the person is declared dead.

What’s in a word? Changing the usage of words

I can hear an anti-abortion activist saying, “Come on! Human life begins at conception. You’re murdering an unborn person, an innocent child.” My response is: you’re trying to change the common usage of our words. People generally reserve the words “child” and “person” to refer to humans who’ve already been born and who are conscious (or have a history of consciousness). Nobody ever bothered calling an embryo an “unborn child” until pro-life, religious activists thought to do so. The reason is clear: there are significant differences between an embryo and a child.

Of course, sometimes we do change how we use words.

At some point in history, scientists realized that the evening star and the morning star were the same thing (Venus). Scientists could give a reasonable explanation about why the change was appropriate and about why the word usage should change.

Thanks to Einstein, people came to believe that energy and matter are really the same thing.

Another example, closer in spirit to the abortion debate, is the change in the status of African Americans during abolitionism. Slave owners apparently thought that the slaves weren’t fully human. But later on almost everybody saw that that position was unreasonable. People came to accept that the differences between Negroid and Caucasian humans were insignificant.

But in the case of abortion, there’s clearly a huge difference between an early stage embryo and a full term fetus. Why or why isn’t that difference significant? Just shouting “But it’s an innocent child!” doesn’t address the question.

If someone thinks that a word is incorrectly used, they need to give substantive arguments about why the old way is inaccurate. Anti-abortion activists haven’t added any new knowledge or insight into what it means to be a person (a “precious human”). All they have done is to appeal to our emotions, by holding magnified photos of aborted embryos and by repeating things like “abortion is the murder of an unborn child,” when the precise point on which we disagree is whether a brainless embryo has enough inherent preciousness (consciousness, in my view) to warrant being called an “unborn child.”

A fertilized egg has no consciousness and no history of consciousness. If it’s precious, the preciousness lies entirely in the eyes of the beholder — or in what it what it has the potential of becoming. But an unfertilized egg and sperm also have a potential for consciousness, and are they precious too? Only a religious zealot would think so. 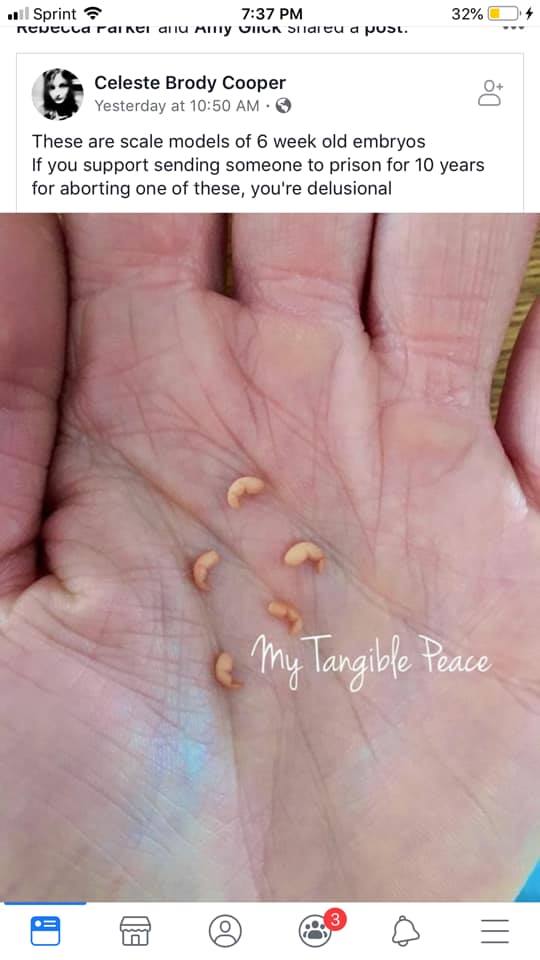 Alas, I’m sure that for the vast majority of anti-abortion activists, their opposition to abortion is based on religious grounds. They should just come out and say so.

I wrote this essay because tens of millions of Americans oppose abortion strongly enough that they voted Republican, even after 2004 when it was clear that those Republican were doing incredible damage to our nation and the world.

For related articles see Dems should support a grand compromise involving reasonable restrictions on late-term abortions and Why the GOP is more pro-abortion than the Dems.

Ultimately, whether someone thinks fetuses, animals, or humans are precious is something that is based on opinion or emotion, not on fact. From the point of view of the universe, even children and adult humans may be worthless. It’s not clear to me that our valuing of people can be justified rationally. It’s just something we’re genetically programmed to do.

by Valerie Tarico Cross-posted from ValerieTarico.com Lists of crazy comments about women by Republican men have been an internet staple for years. If the party agenda were to alienate as many females as possible, they should be doing quite well. Worse yet, from an impact standpoint, the policy priorities of Republican electeds match their expressed […]