Trump has never been worse — but his approval is surging. Why?

The Coronavirus Hoax “People should ask themselves whether this coronavirus “pandemic” could be a big hoax, with the actual danger of the disease massively exaggerated by those who seek to profit – financially or politically – from the ensuing panic.” — libertarian Ron Paul

Trump Won’t Order Vital Coronavirus Supplies Because Corporate CEOs Asked Him Not To.  “They’re worried it could be bad for business.”

Intelligence Agencies Repeatedly Warned Trump of a Likely Pandemic. He Ignored Them.

‘Freedom payments?’ The coronavirus exposes the fraud of the anti-government movement. “The stated premise of the Tax Cuts and Jobs Act of 2017 was to goose the economy, which it didn’t do (annual growth was exactly the same in the two years prior to passage as in the two years after — 2.4%). So it didn’t make America stronger. What it did was weaken the federal government, by looting the treasury to feather the nests mostly of corporations and the already rich. This withering of the government has always been part of the point. But where are the adherents of this now — now that we’re in trouble? They’re clamoring for their own freedom payments.” To bailout corporations and Wall Street.

Trump’s Dangerously Effective Coronavirus Propaganda “The president’s effort to play down the pandemic is being amplified by a coalition of partisan media, digital propagandists, and White House officials.”

Why Trump Intentionally Misnames the Coronavirus “When conservative figures continually refer to the “Wuhan virus” or “Chinese coronavirus,” it’s clear they’re doing it to make a point.”

Trump officials did sound the coronavirus alarm. They just don’t work there anymore. “The dire message coming from former administration officials often stood in contrast to the upbeat narrative emanating from the White House.”

The Dismantled State Takes on a Pandemic “Conservatives won their war on Big Government. Their prize is a pandemic.”

You can’t make this stuff up: Trump administration isn’t backing off proposed cuts to CDC budget “In early February, the White House unveiled a budget that called for deep CDC cuts. Yesterday [March 10, 2020], the administration refused to back down.”

Trump Picks Mark Meadows, Who Had Talked About Sending Obama <93>Back to Kenya,<94> as New Chief of Staff

Danny Westneat of the Seattle Times (March 4, 2020): <93>Within a couple days, (it is) going to be down to close to zero,<94> Trump confidently declared about the bug just six days ago. —

Newsweek: Income Growth Slowed Across the US Under Donald Trump (was faster under Obama)

Newsweek: Right-Wing Extremists Are a Bigger Threat to America Than ISIS

Despite Trump reversal, not even the military thinks landmines are a ævital toolÆ

The Heartland Lobby: Inside the climate change denial movement.

The 2020 Election will be a War of Disinformation “A CBS News/YouGov poll has found that just 11 percent of strong Trump supporters trust the mainstream mediaùwhile 91 percent turn to the president for ôaccurate information.ö

Bryan Lanza, who worked for the Trump campaign in 2016 and remains a White House surrogate, told me flatly that he sees no possibility of Americans establishing a common set of facts from which to conduct the big debates of this yearÆs election. Nor is that his goal. ôItÆs our job to sell our narrative louder than the media,ö Lanza said.

Yes, Donald Trump has been linked to the mob

Trump’s assassination of Soleimani led to Iran’s reprisal which caused 64 U.S. soldiers to sustain traumatic brain injuries, as well as causing Iran to (mistakenly) shoot down a passenger airline.

Did Donald Trump Say Karen McDougal and Stormy Daniels Reminded Him of Daughter Ivanka? “Both women have alleged in interviews that the president compared them to Ivanka Trump.”

Donald and Ivanka Trump Were Involved in InaugurationÆs Inflated Payments to Family Business, New Suit Says ôMembers of the Trump family were aware of and involved in the negotiation of this unconscionable contract,ö the District of ColumbiaÆs attorney general wrote in the suit.

Trump and Pence Demand Trust, Then Lie, Blaming Soleimani For Benghazi and 9/11

How ‘Lock Her Up!’ just blew up Another useless GOP investigation turns up a big fat nothing burger. This makes three now, that have amounted to nothing. Meanwhile, Mueller’s investigation into Russian interference in the 2016 election led to 199 criminal counts against 37 people and entities. Seven people pleaded guilty; six were sentenced to prison.

Justice Dept. winds down Clinton-related inquiry once championed by Trump. It found nothing of consequence.

Did Harry Truman Denounce the Use of æSocialismÆ as a æScare WordÆ? Yes, he did!

I never understood wind. I know windmills very much, I have studied it better than anybody. I know it is very expensive. They are made in China and Germany mostly, very few made here, almost none, but they are manufactured, tremendous – if you are into this – tremendous fumes and gases are spewing into the atmosphere. You know we have a world, right? So the world is tiny compared to the universe. So tremendous, tremendous amount of fumes and everything. You talk about the carbon footprint, fumes are spewing into the air, right spewing, whether it is China or Germany, is going into the air.

USA Today: Deaths in custody. Sexual violence. Hunger strikes. What we uncovered inside ICE facilities across the US

NPR: After 2 Years, Trump Tax Cuts Have Failed To Deliver On GOP’s Promises

Ex-Breitbart editor says Stephen Miller is a white supremacist, and she was too 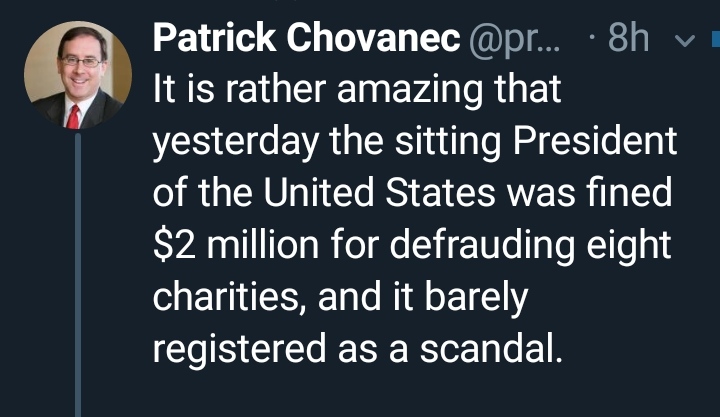 As a Businessman, Trump Was the Biggest Loser of All

Between 1985 and 1994, the Times story says, TrumpÆs core businesses lost money every single year, and the accumulated losses came to more than a billion dollars. ôIn fact, year after year, Mr. Trump appears to have lost more money than nearly any other individual American taxpayer, the Times found when it compared his results with detailed information the I.R.S. compiles on an annual sampling of high-income earners,ö Buettner and Craig write. ôHis core business losses in 1990 and 1991ùmore than $250 million each yearùwere more than double those of the nearest taxpayers in the I.R.S. information for those years.ö

There Are Two Separate Impeachment Hearings Happening Right Now ù And Republicans Are Winning Theirs “Nothing Republican Rep. Devin Nunes does during the hearings makes sense if you watch it in the moment. When itÆs posted on Facebook later, though, it works perfectly.”

Trump sought to allay fears about his health during his presidential campaign, releasing a letter from his long-time personal doctorùDr. Harold Bornsteinùwhich lauded Trump’s “astonishingly excellent” condition and claimed he would “unequivocally” be the healthiest president in history. Bornstein has since told NBC News that the president wrote the letter himself. In 2017, Bornstein also claimed that Trump aides turned up unannounced at his office and removed files relating to the president. (source)

The Demolition of U.S. Diplomacy

Former Nixon counsel John Dean: Trump ‘should have been impeached the day he walked in’

‘Sitting in class hungry’: Schools wary of Trump plan to end free school lunches for some

Trump promised to bring offshore profits back home. Now he’s doing the opposite

How Donald Trump Shifted Kids-Cancer Charity Money Into His Business

Why Are Conservatives More Susceptible to Believing Lies?

Yahoo Finance: Trump adds $4.1 trillion to national debt. Here’s where the money went “The biggest contributor to the $4.1 trillion that will be added to the national debt through 2029 is the Tax Cuts and Jobs Act. This signature tax cut legislation signed by Trump in 2017 single-handedly increased the debt by $1.8 trillion, according to CRFB.”

How the GOP’s Tax Cuts and Jobs Act benefits mostly the rich “This page includes estimates of TCJAÆs effects in 2020. Most of the lawÆs benefits will go to the richest fifth of Americans, and a significant portion will go to foreign investors who own stocks in American companies and, therefore, benefit from the corporate tax cuts.”

Scientific American: Scientists have been underestimating the pace of climate change

Time: æWe Are Being Eaten From Within.Æ Why America Is Losing the Battle Against White Nationalist Terrorism “In more than a dozen interviews with TIME, current and former federal law-enforcement and national-security officials described a sense of bewilderment and frustration as they watched warnings go ignored and the white-supremacist terror threat grow. Over the past decade, multiple attempts to refocus federal resources on the issue have been thwarted. Entire offices meant to coordinate an interagency response to right-wing extremism were funded, staffed and then defunded in the face of legal, constitutional and political concerns.”

The Trump Tax Cuts Worked (As a Scam) By Eric Levitz “In May, the Congressional Research Service (CRS) found no sign that the Trump tax cuts made any discernible contribution to growth, wages, or business investment. Corporations did not plow their windfalls into exceptionally productive and innovative ventures. Instead, they mostly threw their handouts onto the giant pile of cash they were already sitting on, and/or returned it to their (predominantly rich) shareholders.”

Forbes: The 2017 Tax Cuts Didn’t Work, The Data Prove It: “Investment did not boom and workers will not see the promised bump in pay. The richest Americans instead got even richer while corporations used a lot of the new money to keep shareholders happy.”

A rise in premature births among Latina women may be linked to Trump’s election, study says

Meet the Economist Behind the One PercentÆs Stealth Takeover of America

DeVos Repeals Obama-Era Rule Cracking Down on For-Profit Colleges “Education Secretary Betsy DeVos on Friday officially repealed an Obama-era regulation that sought to crack down on for-profit colleges and universities that produced graduates with no meaningful job prospects and mountains of student debt they could not hope to repay.”

Do Americans Support Military Action Against Iran? Republicans do.

While most respondents overall opposed military action against North Korea, the “majority of Trump supporters prefer the US strike in every scenario, except when confidence in the effectiveness of the US conventional strike is 50 percent”ùand even then it remained at 44 percent as opposed to a mere 8 percent for non-supporters. Separately, those who backed the death penalty were actually more eager to inflict a higher death toll among North Korean civilians.

æThere Is a StenchÆ: No Soap and Overcrowding in Detention Centers for Migrant Children, An Expert on Concentration Camps Says That’s Exactly What the U.S. Is Running at the Border

Trump’s order to slash number of science advisory boards blasted by critics as ‘nonsensical’ “It’s no longer death by a thousand cuts. It’s taking a knife to the jugular,ö one science advocate said of the order to eliminate a third of the advisory boards.

“In 2016, when he was running for President, USA Today found that [Trump] had been involved in thirty-five hundred lawsuits, and was the plaintiff in nearly two thousand of them.” (The New Yorker, May 13, 2019)

Meet the Money Behind The Climate Denial Movement “Nearly a billion dollars a year is flowing into the organized climate change counter-movement.”