Why did 41st LD Reps Tana Senn and Judy Clibborn, along with about a dozen other state Democratic lawmakers, vote in favor of Republican Steve Litzow’s SB 6194 (charter school bill)?

The vote goes against the state Constitution and the Supreme Court ruling last year, which state that charter schools are unconstitutional.  It goes against the state Party platform, which says “We oppose charter schools.” And it goes against the wishes of major Democratic constituencies, including teachers, progressives and Labor.  Moreover, the vote effectively takes money away from public schools at a time when the legislature is in contempt of court for failing to fund public schools (McCleary decision). Lastly, Senn and Clibborn have given Litzow the opportunity to brag about the bipartisan support for his bill. Like Senn and Clibborn, Litzow is from them 41st LD.

The Dems are aiming to replace Litzow in November. So why would Senn and Clibborn grant him and the Republicans the favor of voting for his bill, delivering a major victory? And why would they knowingly infuriate half the Democratic base in this election year?

For years Republicans have been trying to undermine public education and other government programs. They’ve blamed teachers, attacked unions and tried to convince voters that government can’t be trusted.  Republicans have refused to fully fund education, have held teacher salaries low, and have ignored the state Supreme Court’s McCleary ruling and the subsequent contempt order that’s fining the legislature $100,000 a day.  So, it’s a surprise that Democrats would come to the aid of Republicans, further the neoliberal agenda of dismantling government, and fund charter schools while McCleary isn’t yet funded. 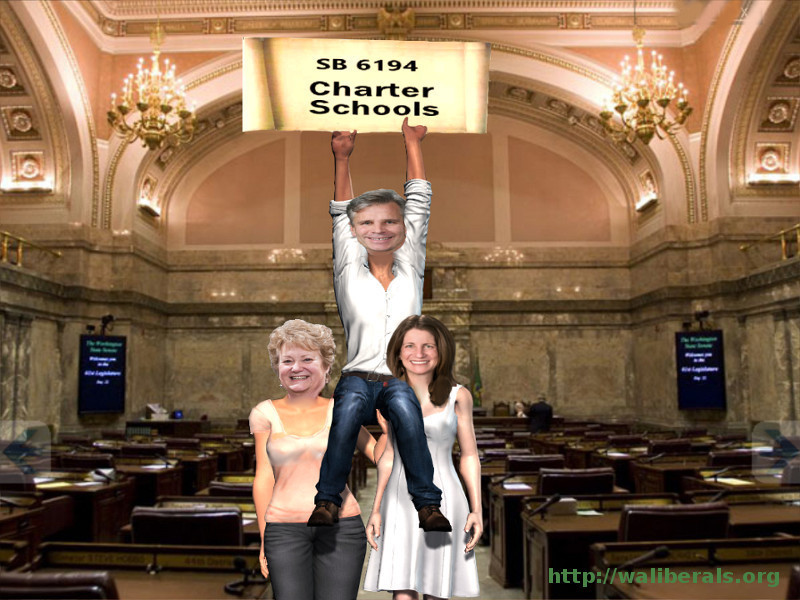 At February’s 4st LD town hall meeting, Senn told me that the Democratic House leadership would be unlikely to allow the charter school bill to come up for a vote. But she acknowledged that it might pass due to some kind of trade. (See Litzow’s mistatement, and can Eastside Democratic legislators support progressive taxation?.)

But apparently, there was no such trade. Senn mentioned no such trade in her email to her constituents (below). Also, Senator Maralyn Chase and other Democrats are angry at the passage of the bill. See State senator from Edmonds says she’s disappointed with 2016 legislature.

Some Democrats I have spoken with in the 41st LD try to defend the vote by saying that, after all, voters narrowly approved charter schools in 2012 (I-1240). OK, but that was because of the nearly $11 million in spending by the Waltons, Bill Gates, and others. That was 17 times the spending by anti-charter school forces.

The argument “Well, the voters voted for charter schools” is weak, given the fact that corporate forces spent millions to convince them.  By the same argument, you could say, “Well, voters have voted for Tim Eyman initiatives, so we mustn’t try to fix our tax system” or “Voters elected Republicans to the Senate, so we must respect their will.” We need to fight for public education and other Democratic values!

There was an amendment to SB 6194 that would have authorized the funding of the existing charter schools but would have prohibited the funding of additional schools. But that amendment failed.  So, the legislature has authorized the creation of new charter schools, and the governor let it become law.  This is not something real Democrats should be supporting.

Furthermore, the state Supreme Court is likely to rule that SB 6194 is unconstitutional. That’s the opinion of Rep. Patricia Kuderer, D-48, who voted against SB 6194 and explains why in Charter Schools are not out of the woods yet. Kuderer starts by warning against “the kind of fraud and mismanagement happening with charters in other states.” She goes on to write:

A bill introduced in the state Senate this year [SB 6194] attempts to resolve two constitutional issues the Court had trouble with, but completely ignores other likely constitutional problems with the charter schools initiative.

Moving forward, there are three major issues I believe must be resolved if charters are going to survive legal challenges.

Local control – I have two core values when it comes to using public resources – transparency and accountability. These important values are missing from the charter system now, but must be part of a final solution. Local control is vital to ensuring all schools are transparent and accountable.

However, as more charter schools open, or as existing ones expand, there will likely not be adequate revenue in the Opportunity Pathways account, which also funds programs like scholarships and grants to low-income students, to keep up with the demand. Funds will eventually be shifted from the general fund to the Opportunity Pathways account, and this co-mingling of funds will either directly or indirectly support charter schools.

But even if the Supreme Court overturns SB 6194, the bipartisan support for it has moved the needle to the right on the issue.

I know that many Democrats in King County are furious that the House leadership let the bill come up for a vote, that ten Democrats voted with Republicans in favor of the bill, and that Gov. Inslee allowed the bill to become law without either signing it or vetoing it.  There was a letter-writing campaign by the King County Democrats to convince legislators to oppose SB 6194.

Republicans must be smiling now.

In Washington State: The Democrats Who Betrayed the Public Schools Diane Ravitch explains what happened.

With the support of the Washington Charter Association and a grant from the Bill and Melinda Gates Foundation for $2.1M- charter schools remained opened- and they did so by having the state’s superintendent of public instruction corrupt Alternative Learning Rules.

In January, Steve and Connie Ballmer contributed $250K to a charter PAC. These dollars are being used to fund TV ads, polls, robo calls etc.

Senn’s letter to her constituents

Tana Senn wrote the following explanation for her vote to some of her constituents:

No matter one’s view on the issue, the charter schools initiative passed and charter schools operate in our state. Many of the children currently being served by charter schools are students of color, at-risk boys and girls from low-income families and/or those with special needs who may need different learning environments for various reasons.

For the past three years, I’ve served on the Early Learning and Human Services Committee and witnessed the many barriers families face trying to break out of the cycle of poverty and the lifelong negative affects often associated with poverty. Dropping out of school is an entry point into that cycle.

Undoubtedly, fully funding our public schools serving 1.1 million students is our number one priority next year! Our State has amazing public schools staffed by hard working, dedicated and inspiring teachers. But we have failed to fund these institutions time and time again.

Fixing the funding problem so we can reduce class sizes, add school counselors, offer competitive teacher pay and improve special education will require a bi-partisan effort and the resolve to do what’s right and what we should have done so long ago.

It is likely to take a couple years for that funding to reach the classroom and make needed investments. It is also about the time the State Supreme Court is anticipated to rule again on the constitutionality of charter schools.

But two years is a long time in the educational life of a young person. Those boys and girls were first and foremost on my mind when I voted for the charter school bill. We also passed the Education Opportunity Act and the Homeless Student Act that week, which will help hundreds of thousands of more kids have a better chance at success in life. All we can do is critical.

I point out, though, that every penny spent on charter schools is a penny lost to public schools.

It’s true that some schools in high poverty districts are failing. That’s because of poverty and because Republicans refuse to fund them adequately! That’s a standard Republican tactic: corrupt, under-fund and mismanage government; then complain it doesn’t work. In fact, America’s low test scores are largely an artifact of our high poverty rate. The countries that beat us in standardized tests have public schools.

Furthermore, the bill funds not only the existing charter schools but also additional schools. That was completely unnecessary.

Pay back from the tax dodgers

As reported in League of Education Voters backs Inslee, top Republicans,  after the passage of SB 6194, there were big endorsements for Steve Litzow, Jay Inslee, Tana Senn, Judy Clibborn and other supporters of SB 6194, from the charter-schools-loving League of Education Voters, who are funded by Microsoft, Boeing and the Gates Foundation (the 1%). Follow the money. Boeing and Microsoft enjoy tax breaks and use their money to defund public services and enrich corporations at the expense of the middle class (who pay the vast majority of taxes here in Washington State).

Contrary to the statement in the article, Gates, Boeing, and Microsoft are not independent at all. They’re self-interested tools of the 1%, intent on dismantling public education and blaming teachers for outcomes that are the result of poverty and willful under-funding of education. Republicans and their neo-liberal Democratic allies willfully under-fund government so it doesn’t work well and so that they can justify tax cuts for rich people and privatization of government services.

The ten turn-coat Democrats are:

I acknowledge that there is an honest difference of opinion with the Democratic Party, as well as a division between the progressive wing and the corporate wing that approves policies such as charter schools. But given the following facts, the choice of these Democrats to vote for SB 6194 seems unwise at best, and probably perverse:

No wonder Democrats are voting for candidates like Bernie Sanders. Mainstream (aka “corporate”) Democrats can’t apparently be trusted to support the platform and ideals of the party of FDR.

The participation by a large number of Independents in the 2016 caucuses, their youth, and their overwhelming support for Bernie Sanders give me hope that the Democratic Party can be reformed. 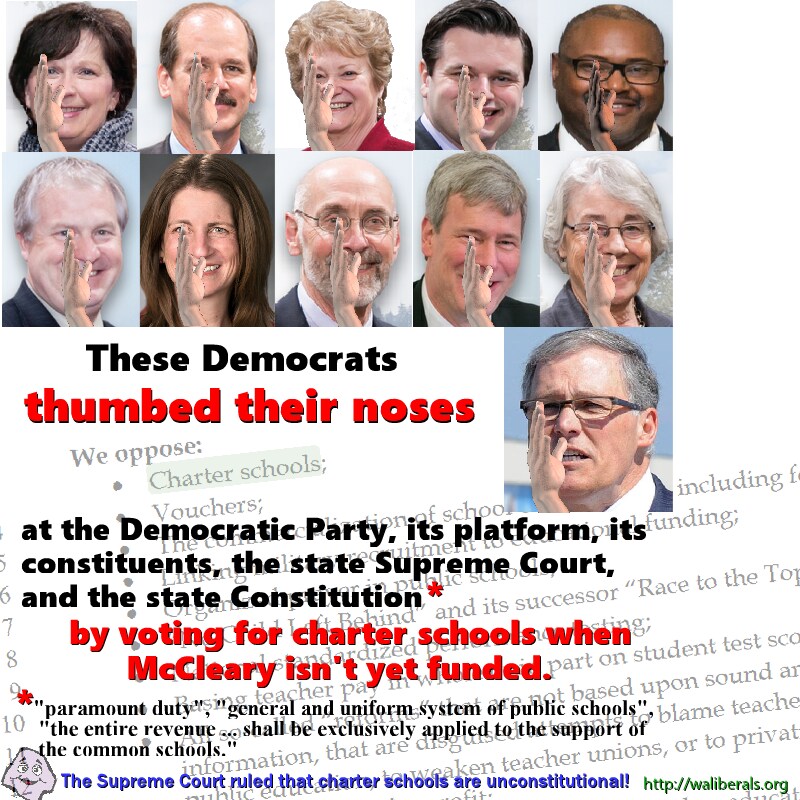 ACTION REQUIRED BY THE PEOPLE Senate Bill (SB-5062) aimed at Criminalizing Squatting in Foreclosed Homes The digest of this bill reads: “SB 5062 zz- DIGEST Clarifies the law to provide additional tools to courts, law enforcement, and communities to deal with the threat that squatters pose on foreclosed property. Provides that a person is guilty […]

3 Replies to “These Dems voted to undermine public schools, contravene the Constitution, and aid Republicans”