1. Democrats in Washington State overwhelmingly voted for Bernie Sanders in the caucuses

72.7% of Washington Democratic caucus attendees preferred Sanders over Hillary. That’s a 45% preference for Sanders.   If superdelegates ignore such a wide preference, there will be an uproar, and justly so. An attendee to Gov. Inslee’s precinct caucus says that Inslee spoke in favor of Hillary but Sanders still won that precinct. It seems the party leaders are out of touch with the grassroots.

2. Hillary is a neocon’s neocon

As Secretary of State, Hillary Clinton was consistently one of the most hawkish voices in the Obama administration.

“I have a sense that she’s one of the more competent members of the current administration and it would be interesting to speculate about how she might perform were she to be president.” .Dick Cheney

“I’ve known her for many years now, and I respect her intellect. And she ran the State Department in the most effective way that I’ve ever seen.” .Henry Kissinger

“For this former Republican, and perhaps for others, the only choice will be to vote for Hillary Clinton. The party cannot be saved, but the country still can be.” .Robert Kagan, neocon co-creator of Project for the New American Century.

3. The Clinton foundation is corrupt

Yesterday, Judicial Watch released a batch of documents, obtained through a Freedom of Information Act request, that it says reveals blatant coordination between then-Secretary of State Clinton and the Clinton Foundation. Stunningly, the internal State Department emails expose Clinton.s eagerness to .thank [Clinton Foundation] supporters for their commitments.. Of course, these .commitments. must mean money. It.s incredible.

4. Hillary has close ties to the financial industry and depends on them for campaign funds.

Why won’t she release transcripts of her paid speeches to Goldman Sachs and other financial groups?

In various ways, Bill Clinton and Barack Obama have betrayed Democratic ideals, by promoting “free trade” agreements, by deregulating Wall Street, by surrounding themselves with Wall Street hacks, and by pursuing imperialistic military engagements and meddling.

Sanders’ nomination will bring millions of young people into the Democratic Party. Hillary’s candidacy will alienate young people, progressives, and Independents who are sick of the status quo.

9. Hillary flip-flops to get votes, Bernie Sanders has been consistent

Hillary has flip-flopped on marriage equality, TPP, the Keystone XL pipeline, and other issues.

10. Sanders’ message of economic inequality and an end to money-in-politics is precisely what America needs 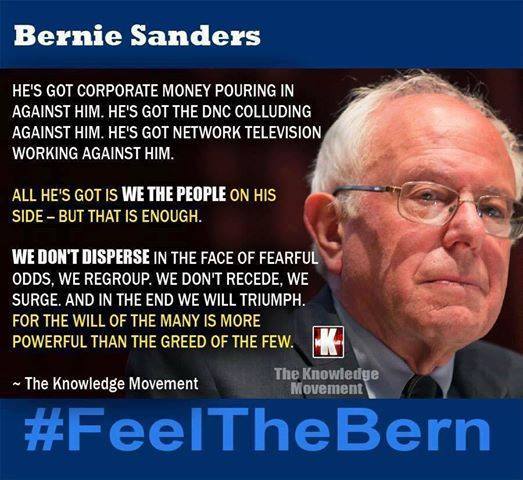 The Definitive, Encyclopedic Case For Why Hillary Clinton is the Wrong Choice makes a detailed case against Hillary.

Tea Party is AKA

“Tea Party” sounds so much nicer than “Koch-funded, Fox News-enabled mob of racists,  sexists,  homophobes, xenophobes, and  anti-government nutcases.” (adapted and modified from here) AKA= Also Known As (Video from MoveOn.) Comments comments