Microsoft announced this week that it will spend $500 million to offset the lack of affordable housing and combat homelessness around Lake Washington. The money will be dispensed through loans and grants to promote development and support the homeless through legal aid, financial funding, and casework.

It’s hard to say that the noblesse oblige of large corporations is a problem. It’s wonderful when they give back to the communities that allowed them to thrive. But it is a problem when generous giving covers up tax avoidance.

While charitable support can and should be directed to solve critical social challenges, it cannot be seen as a replacement for democratic institutions. Charity cannot absolve corporations of dodging taxes, as Microsoft and Amazon have, and it cannot justify the grand tax breaks that local and state governments offer to please big business.

To put the saddle back on a dead horse, Amazon worked diligently to crush last year’s head tax on Seattle’s largest corporations, which would have raised about $47 million a year for the city to pay for affordable housing and homelessness services, of which Amazon would pay $20 million. Amazon bullied the city, halting construction on buildings. 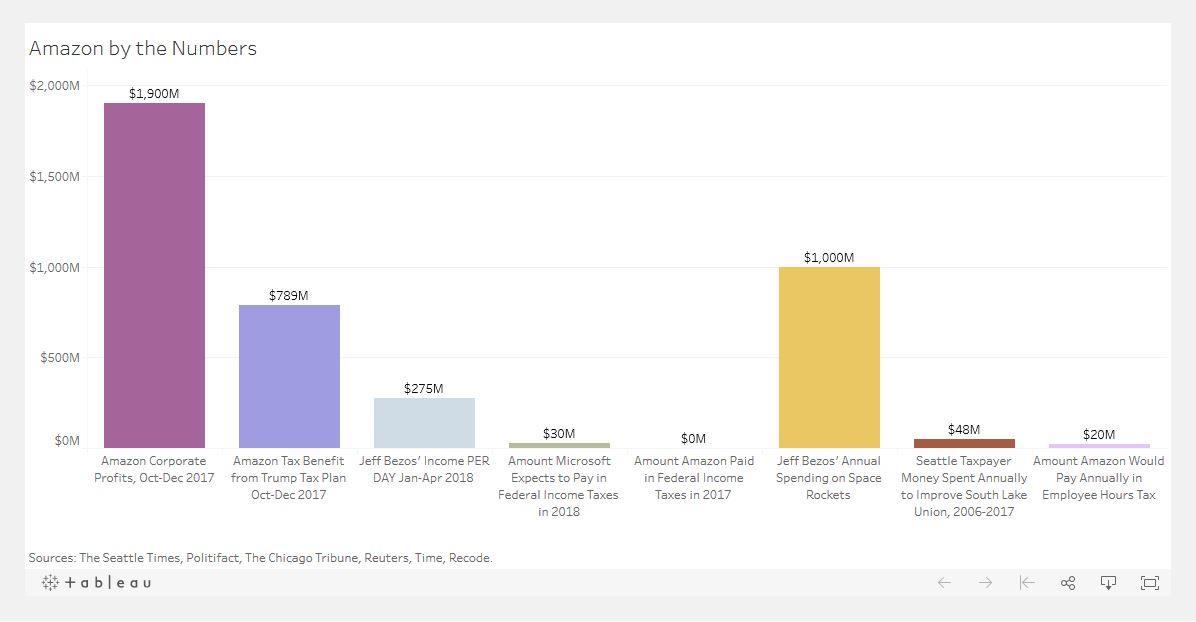 Amazon won, but the company famous for lack of charity looked even more miserly. So Jeff Bezos created the Day One fund, offering $2 billion to fight homeless nationwide (He’s worth $140 billion). That is a lot more, but it’s for the whole country. Seattle has 0.22 percent of the U.S. population, so if everything were distributed equally, the city would receive a one-time $4.4 million from Bezos instead of $20 million annually from Amazon.

But that’s not the main point.

The Bezos fund gives money to existing nonprofits and works to create a network of high-quality, full-scholarship Montessori-inspired preschools. It doesn’t work to build affordable housing, and it only helps families – not people escaping domestic violence, overcoming addiction, or struggling with mental health issues.

A main problem with charity replacing taxes is that corporations – not the people – decide which social issues are worthy of tackling and how to fix them. It make society dependent on the whims of largesse from very wealthy people, and removes agency from democratic institutions.

The Bezos fund is creating Montessori schools, but why? Main causes of homelessness have been shown to be unaffordable housing, lack of social services, and poor medical care, but not necessarily education. There’s no data showing that improved childhood education will lower homeless rates, but that’s what Bezos wants to fund, so that’s what’s happening.

And the costs of their charity gets passed onto the people. Very wealthy people are responsible for about half of charitable tax write-offs. A $1 donation from someone in the top 1 percent of earners reduces the government’s funds by 32 cents, while a $1 donation from someone in one of the bottom two income quintiles reduces it by less than 5 cents.

Indirectly, the government is footing the bill for what rich people decide to care about. If the government had the money, the people would be in charge and could – ideally – fund programs with scientific backing and the greatest need.

The larger issue is that corporate charity can make it look like corporations are giving more to the community than they are receiving. Disregarding the fact that taxes pay for roads, infrastructure and other services corporations use, the people are actually paying corporations just to be here.

Thanks to its lobbyists in Olympia and compliance by legislators, Microsoft has gained over $1 billion in tax incentives just from the state of Washington since 2010. That doesn’t tend to attract the kind of headlines that Microsoft’s donation garners.

This is the data from the Washington Department of Revenue: 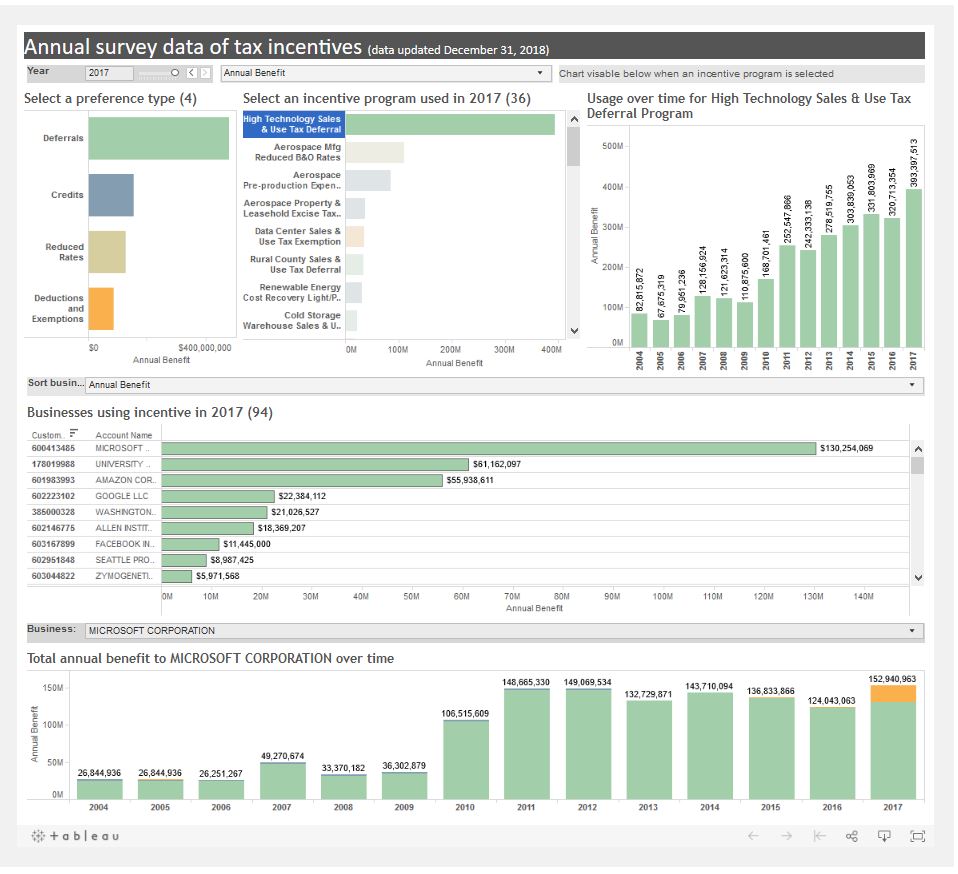 From 2015 to 2017, Microsoft reported worldwide income of almost $43 billion. It claims to have earned just 0.3 percent of that — $128 million — in the United States. That seems unlikely. The company in 2017 disclosed $142 billion in foreign earnings, on which it would have paid a tax rate of 31.7 percent if these profits were repatriated. The company was avoiding a whopping $45 billion in taxes by holding its money offshore.

Inequality is growing, and both the wealthy and corporations find ways to avoid taxes the rest of us pay.

Taxes improve our schools, fix our roads, and support people who find themselves unemployed or unable to find housing. If corporations paid their taxes, we might not need their charity in the first place.

What are we getting out of Boeing’s tax breaks?

As a young girl, my daughter had a fear of flying. She overcame this through a thorough study of airplanes and landed on the 737 as her preferred means of transportation in the air. So naturally, she asked for a Boeing T-shirt for a present. It says, “If it’s not Boeing, I’m not going!” So […]

$1.6 trillion of military spending per year

including $400 billion in interest payments on debt from prior wars. Where do 53% of your Tax dollars go? To fund the most enormous war machine the world has ever known.  Our defense budget is larger than the next 26 countries’ combined. Comments comments

Ellen Brown, author of Web of Debt, is the inspiration and thought leader behind the Public Banking Institute, where she serves as Chairman and President. Ellen will discuss the benefits of public banking, the disadvantages of the current banking system and what we can do to take control of our banking system so it works […]